But for a final pass here and knock-on there, Leinster could’ve won by a lot more at Aviva 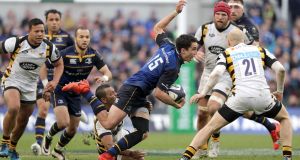 Leinster’s Joey Carbery steps past Kurtley Beale of Wasps during his team’s win at the Aviva. Photograph: Morgan Treacy/Inpho

It was a remarkable performance, for the most part breathtakingly beautiful, as Leinster thundered into the Champions Cup semi-final, awaiting now the outcome of Sunday’s game between Clermont Auvergne and Toulon.

The home side could have won by more, 25-3 up and rampant, but they just never quite managed to rid themselves of a mistake here and there that allowed Wasps some cheap points but it’s a minor quibble, based on the outcome.

Leinster deserved to win this match, they never shirked the conviction of their ways, but for a final pass here and a knock-on there, they could have reached a half-century of points that wouldn’t have flattered their general superiority. Wasps were gutsy but overmatched on the day.

It was a tremendous team performance from the home side and it really would be churlish to single out individuals because every single player excelled. Joey Carbery won the man of the match, his selection at fullback fully vindicated, by a performance choc-full of flair, footwork, imagination and pace. He makes the odd mistake but the ledger is heavily stacked in terms of positivity.

The Leinster pack dominated their opponents – everywhere apart from a few loose lineouts – the forwards just as dexterous in their handling in the squally April showers. Jack McGrath and Tadgh Furlong carried hard, so too Devin Toner, Hayden Triggs had a massive game, his best in a blue shirt, Richardt Strauss chopped down Wasps players; with the backrow of Dan Leavy, Sean O’Brien and Jack Conan masterful.

Luke McGrath and Jonathan Sexton provided intelligent direction while the exceptional midfield axis of Robbie Henshaw and Garry Ringrose, had brilliant games on both sides of the ball. Lions coach Warren Gatland’s job has got tougher.

The quiet intelligence of Isa Nacewa ensured good decisions and execution while Fergus McFadden slotted in nicely when introduced for the injured Adam Byrne. The bench provided impetus too.

Wasps never gave up but they were outplayed and outclassed over the 80-minutes; they are a fine side but were under ferocious pressure and had their key players suffocated.

Leinster produced passages of play in the opening 40-minutes that were exquisite, a homily to attacking rugby in its purest form, played with pace, width, clever angles and support play, and a willingness to offload, despite the challenging weather conditions.

It properly represented the style that Leinster espouse, or try to, and reinforced that self-belief within the team in the patterns of play. Wasps were largely blown away, chasing shadows at times, fighting a rear-guard action, and surviving at times by a few millimetres of cloth.

If there was one cavil in the first half, it was that Leinster occasionally gave away soft penalties, at times when they were surging towards the visitors’ line, or had Wasps corralled in the 22 and gave them an escape route that they couldn’t otherwise have mustered.

Leinster set a tone for the content of their performance during that period with a brisk start, using the full expanse of the pitch, varying the point of attack between pulling the ball back behind a front line of blue shirts of letting their forwards look for soft shoulders in contact; something they did brilliantly at times.

The first score came on five minutes, Joe Launchbury penalised for illegally trying to neutralise a Leinster maul. Sexton coaxed the ball through the uprights from 26-metres.

There were a few kicking aberrations, balls sliced out on the full, or just not arriving at the intended destination. Leinster though barely missed a beat, continuing to play with a rhythm and aggressive in terms of a line speed that forced Wasps into errors, behind the gain-line. Hayden Triggs tackle on Danny Cipriani was a classic example of the latter.

The home side’s first try on 14-minutes came shortly after a searing Robbie Henshaw break but the English club wouldn’t escape on the second occasion. Leavy punched a superb hole in carrying into the Wasps 22 and when the ball was moved wide, Carbery’s superb cut-out pass put Nacewa over in the corner.

Sexton couldn’t add the conversion from the touchline. Leinster lost Adam Byrne to injury, replaced by Fergus McFadden. There was not let-up in ambition but from nowhere the home side looked to have shipped a sucker-punch on 23-minutes.

Kurtley Beale, Wasps best player, fielded a pass somewhere around his ankles in his own 22, eluded two tacklers, and raced into open country, before gliding past a third and offloading to the supporting Willie Le Roux.

The South Africa cruised to the line but in effecting a swan dive he lost control of the ball; the ultimate cringe moment. The television match official confirmed as much after the try had originally been awarded.

It recalled a moment when Argentine Juan Manuel Leguizamon lost the ball over while playing for an Aviva Premiership match for London Irish several years ago, coincidentally against Wasps.

Three soft penalties, all avoidable, gave Wasps a foothold in the game and ultimately their first score when Furlong was adjudged to have taken out taking Cipriani off the ball, the Wasps outhalf having only recovered from being dunted aside by Conan.

The outstanding Leinster number eight was to have another red letter moment a couple of minutes later, crossing for a try, after Carbery and McFadden worked the ball beautifully down the touchline, interchanging passes before Conan accelerated up alongside to outpace the last defender and dot down.

Sexton added the conversion. A clever kick from Nacewa was negated when O’Brien penalised at the ruck in the Wasps 22.

However as the English club tried to maul the ball from a lineout following the relieving penalty kick to touch, Toner forced a fumble, Leavy was so sharp to drop and flick up the lose ball, O’Brien and Sexton took it on, creating the pace for Henshaw raced under the posts. Sexton added the conversion.

It was looked a pivotal score in first half injury time and when Sexton kicked a penalty early in the second half to nudge his side into a 25-3 lead it looked like Leinster were set fair to kick on and put the quarterfinal to bed before the end of the third quarter.

But the occasional mistake was still prevalent and Carbery’s decision to run a ball with no support – he’s allowed the odd lapse in judgement – saw him hunted down by replacement Joe Simpson. It pre-empted a Wasps turnover at a ruck and when the ball was worked wide to Christian Wade, he easily beat the Leinster cover to his chip through and touched down.

It was a try out of nothing and Gopperth’s conversion made it 25-10. Leinster should have learnt a lesson but a failure to protect the ball was to cost them dearly, again from the most unlikely origin.

The home side were attacking in the Wasps 22, Henshaw made a nice cut back, but as the ball was moved the Triggs he was stripped in the tackle, Wasps hoofed clear down to the Leinster 22, and 70 seconds later, Leinster old-boy, who meandered his way past several tacklers and stretched out cleverly for a fine individual try, which he then converted.

At 25-17 the sudden anxiety in the crowd was palpable. Another Carbery half-break, a wonderful slaloming run from Ringrose taking him away from several tacklers, saw the home side surge to within metres of the Wasps line; but a knock-on allowed the visitors a crucial turnover that became a penalty release clause when the Leinster scrum was penalised for driving northeast of a straight line.

Wasps deserve massive credit for the character they showed and the manner in which they exploited half chances but Leinster will look at their inadvertent complicity in conceding those two tries when they should really have been tagging on at least a brace of their own.

Leinster continued to try everything to get that game defining breach and it came on 73-minutes, Toner working a lung-bursting line to offer a runner off a ruck in the Wasps 22, taking out two defenders and McFadden showed a poacher’s instinct to pick up and muscle his way over.

The explosion of noise was a release for the pent-up tension that received a second volley when Sexton converted. There was still a suspicion based on the empirical evidence of the game that there could be further scores.

There wasn’t, only time for man-of-the-match Carbery, to leave the pitch to a deserved ovation. Conan took a knee with what looked like a shoulder injury in the final play of the game but did get back to his feet following some treatment from the medical team.

The occasional imperfections of Leinster’s game didn’t matter a jot; it was a brilliant performance against a top quality team, the Aviva Premiership champions, ripped asunder for most of the match.

France beckons, Lyon or Nice and after this performance Leinster travel in expectation rather than hope.