Bottom of the table Zebre shock Connacht in Parma

Italians win only their second game of the Pro12 season, against reigning champions 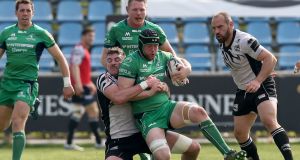 Zebre claimed their first Guinness Pro12 home win of the season with a 25-22 victory over reigning champions Connacht in the rearranged round-three clash.

The Bianconeri, who remained bottom of the standings despite the result, ran in three tries courtesy of Derick Minnie, Tommaso Boni and Edoardo Padovani.

Stacey Ili, Craig Ronaldson and Josh Rowland scored tries for Connacht, who were unable to fully capitalise on a two-man advantage in the game’s closing stages while Minnie and Matteo Pratichetti were both in the sin-bin.

The original fixture was suspended in September due to bad weather at Stadio Lanfranchi, with Connacht trailing the Italian side 10-22 at half-time.

Ili got the visitors off to the perfect start when he scored a try in the second minute, and, while Carlo Canna’s opening penalty of the match cut the deficit, the Irish province increased their lead shortly after.

Ronaldson crossed in the 13th minute, with John Cooney slotting the conversion.

Minnie hit back for Zebre with a try after 24 minutes, and Italy international Canna added the extras.

Another penalty for outhalf Canna meant the hosts led 18-12 at the interval.

Boni increased Zebre’s lead with a try a minute into the second half before Connacht scrumhalf Cooney cut the gap with a 47th-minute penalty.

Ronaldson took over kicking duties after Cooney was replaced by Caolin Blade, and missed his first effort from the tee.

Minnie was then sent to the sin-bin for an offside offence, but it did not disrupt Zebre’s flow as Padovani scored their third try in the 66th minute with Canna converting.

Pratichetti joined him in the bin and Connacht finally made another breakthrough when Rowland crossed with two minutes remaining, Ronaldson converting from the corner, but it was not enough as Zebre held on for victory.

The defeat means Cardiff are just two points behind the reigning champions in seventh place in the Pro12 table. As it stands, for automatic qualification into next season’s Champions Cup, Connacht need to finish above one of the Irish provinces and Ulster are currently 21 points ahead of them in fourth.

Pat Lam’s team though can still qualify via a playoff involving the seventh ranked club in the English Aviva Premiership, the eighth and ninth ranked (most likely the seventh and eighth placed teams in the table) Pro12 teams and the seventh placed French Top 14 club in their final standings.