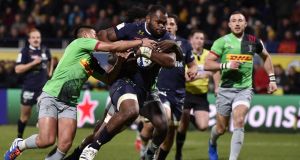 Clermont Auvergne have been forthright in expressing the desire to win a Heineken Champions Cup when the majority of French clubs – Toulon and Toulouse being the obvious exceptions in recent times – maintained a certain ambiguity, their commitment predicated on how they fared in the early matches at the pool stage of the competition.

Much like their quest to win the French Top 14, which they first achieved under Vern Cotter with Joe Schmidt as backs’ coach in 2010, the club endured an inordinate amount of heartbreak before fulfilling that ambition, a feat they would replicate in 2017.

European success has eluded them; on three occasions they have reached the final and lost, against Toulon twice (16-15, 2013) and (24-18, 2015) and most recently against Saracens (28-17, 2017). They have reached the knockout stage of the Champions Cup in seven of the last nine tournaments.

Last season they missed out on the tournament because of poor domestic form and instead had to be content with winning Europe’s second tier competition, the Challenge Cup, beating La Rochelle 36-16 at St James’ Park in Newcastle.

An opening weekend thumping of Harlequins at the wonderfully atmospheric Stade Marcel Michelin has fuelled the energy levels for another tilt at Europe.

Lavish contributors to France’s World Cup squad, they lie sixth in the French Top 14 table, winning five of nine matches. But with one or two exceptions head coach Franck Azéma can draw from a quality-laden playing roster that includes 25 internationals.

French international flanker Alexandre Lapandry, who misses the Ulster match, offered an insight into the mindset of the Clermont players both from the perspective of how they view the trip to Belfast and an unflinching desire to reach the summit of the premier club competition in Europe. He explained: “We know that we have never won the European Cup. It’s an additional motivation”.

He spoke about the legacy of losing finals and how the tournament had been a focal point under previous head coach Vern Cotter, a state of mind that has endured.

“It has always been a challenge for the team. We love everything about this Champions Cup but you have to be physically and mentally armed to compete against teams like Ulster.”

Lapandry and scrumhalf Morgan Parra spoke to the playing group during the week about the challenges they would face playing against Ulster, drawing from the experience of the pool clash between the teams in December 2016, a game the Irish province won 39-32.

“I remember it well and we had a lot of fun playing there because it is a team that we know and respect a lot.

“When we keep memories of matches like that, it’s because they are not ordinary matches. The Ulster players do not let go, they are fighters who respect the opponents. It’s a city that lives for rugby and it’s a great team.”

He pointed out that Ulster have a proud European history as former winners, that the home side also place a huge emphasis on the tournament and that Clermont have to match Ulster’s physicality but not become preoccupied by just that one aspect.

“There may be rain and wind but that’s rugby too, you have to adapt to the conditions. You play in Ireland, in Ravenhill, these are great challenges. You have to master all that and play strategically. Ulster can be a pivotal match, on which we could build, because the most beautiful victories are those away from home, in a hostile environment.”

Clermont will be emboldened by the quality of their performance against Harlequins. Head coach Azéma said: “There was still a lot of apprehension last week, uncertainties about where we were.”

The players’ response was unequivocally positive in a statement performance.

In their pomp Clermont have played some wonderful rugby that has taken them to the cusp of European glory several times. They desperately want to shed the tag of the ‘best club never to have won the trophy,’ and on Friday night in Belfast their credentials will be examined once again. It represents an important staging post as they look towards the summit once again.