Christmas time and Leinster run in nine in rout of Northampton 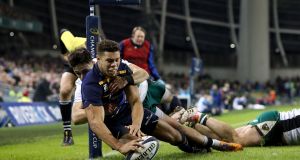 Nine Leinster tries in a non-contest that does the Champions Cup no favours at all. There was hardly any need for the second half.

This festive money maker in the big house went according to plan – except for Ken Pisi’s 98-metre intercept try – as Leinster easily put manners on an under stocked Northampton.

Seán O’Brien didn’t need to reach super human levels as he clicked over the number of matches he played in blue last season. This was his fifth start.

He did carry his weight, stretching over for the bonus point fourth try bang on half-time. Isa Nacewa has kept the kicking tee for most of this campaign despite the presence of Ross Byrne, making his first European start, as Joey Carbery temporarily fades from view after ankle surgery.

The rest of the evening’s focus was on the stadium bars, drinking and merriment.

But plenty of Leinster positives.

All systems up and running. The floodgates took a while to open though with O’Brien looking bemused as Romain Poite allowed Stephen Myler kick Northampton onto the scoreboard.

Then a surprise to rustle the inebriated from their chatter. Byrne brought Leinster within sight of the Saints try line but Pisi read Luke McGrath’s perhaps overreaching pass as the scrumhalf sought to exploit a two-man overlap.

Pisi almost ran out of gas but O’Brien was the main chaser while Nacewa had too much ground to make up.

The try was awarded then Poite disallowed it, for offside, but then he re-awarded it again. All very confusing but Television Match Official Eric Briquet Campin eventually arrived at the correct decision.

The Saints led 13-5 and Leinster deemed that to be enough points for the visitors, who arrived without most of their internationals.

Besides that gift, Luke McGrath produced another fine display as he eases into the Ireland conversation ahead of the Six Nations. His try on 28 minutes actually came from an error after the ball spilled under his legs at a ruck. The defence rushed up so he had no option but to dart for the line. He made it.

Not three minutes had passed when Byrne galloped 50 metres for his second after more atrocious Northampton defending.

O’Brien was next, sneaking out of the lineout drive, a trick we have seen from Ireland this year, to wrap up full marks and leave Leinster top of Pool 4 with 16 points.

But there was another 40 minutes to play, and it was full of little gifts. Like when the King of Campile, Furlong, powered over on 42 minutes before a nice cut out pass by Ross Byrne allowed Seán Cronin nudge Leinster points into the 40s.

Then the camera panned to Joe. He smiled sheepishly when realising he was on the big screen. The crowd lapped it up.

By then Northampton’s tackling was utterly shambolic. Not sure how this performance, caused by the decision to rest the team’s core leaders (those of which are not suspended or concussed), will help morale or Jim Mallinder’s job.

Three Saints fell off Nacewa for the seventh try.

Rory O’Loughlin made it eight while Pisi’s fumble under a high ball, he has previous in this regard, allowed Nacewa to bag his second.

That made it 60. A nothing match but a valuable result all the same.