Connacht living on edge – but edge is where they like it 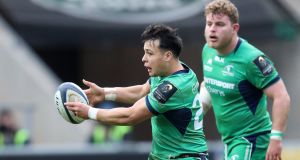 Lights, cameras, action. A win-or-bust Irish-Anglo tie against big-spending two-time winners at a feverish, febrile and full Sportsground, and at Saturday tea-time’s peak slot. So often on the outside looking in, this is the kind of night Connacht yearned for and ultimately earned in style. This evening they dine at Europe’s top table again.

The epic comeback win over Toulouse in the same place and in the same slot on the opening weekend in October underlined how Connacht and the Sportsground have been transformed. Most probably, they will have to scale those heights and more this evening if they are to retain their hopes of qualifying for the last eight and start sampling Europe’s haute cuisine.

Ominously, Connacht are virtually down to the bare bones, with 19 players injured and the on-loan Wasps lock James Cannon unavailable. Hence three of their four changes have been forced on them, with 22-year-old Rory Parata replacing Stacey Ili for his European debut, Matt Healy restored for Cian Kelleher on the wing, Finlay Bealham recalled at tighthead and Eoin McKeon at blindside in the absence of Jake Heenan, with the skilful and hard-carrying Nepia Fox-Matamua – he’s a real player – shifting to openside.

But it could have been worse, and with Bundee Aki and Tiernan O’Halloran pronounced fit, it’s still a strong team. Parata was a regular part of Connacht’s winning start to last season before injury struck, Fox-Matamua gives them real game-breaking oomph on the ball, and Bealham and Healy are, after all, internationals.

Healy is thus re-united in the back three with O’Halloran and Niyi Adeolokun, all now capped internationals and also the try-scoring triumvirate from last year’s Pro12 final, when 10 of this starting team lined up at kick-off.

Qualifying from a group containing the vastly greater financial resources of Wasps and Toulouse would arguably be at least a comparable achievement to winning the Pro12, and to do so most likely they’ll have to reproduce the elan of last May’s final again.

In particular, Connacht need to transfer the multiple phases and attacking ball they enjoyed last Sunday into points, whether it’s Jack Carty nailing his kicks or working O’Halloran’s electric footwork and the pace of Adeolokun and Healy into space.

Since last season, Connacht have lost the element of surprise, and teams – including Wasps last week – have had joy in pushing up hard on the outside with an umbrella defence, whether it was Josh Bassett snaffling a couple of key intercepts or a Connacht player being enveloped, man and ball.

Variations such as inside balls or generating quicker ball to outflank the umbrella will be key. Connacht, true to type, will have to live on the edge, and play on the edges at the right times, but at their best that’s what they do.

The wonder is that Connacht had Wasps on the ropes entering the last quarter last week given that five lost lineouts cost them invaluable field position and attacking ball.

Connacht enjoyed over 50 per cent of possession last week, but they’ll need 60-plus here. They don’t have the ball-carrying ballast of Nathan Hughes, Ashley Johnson and the outstanding Joe Launchbury, and hence nothing in the Pro12 would have prepared them for the kind of high-octane, recycling and quick hands which Wasps produced in the Connacht 22 last week when converting comparatively rare sorties into four tries. Thus the need to keep them at arm’s length.

Not to mention last week’s two missed three-pointers. Talented footballer though he undoubtedly is, Carty has to nail his kicks, not least as we know Jimmy Gopperth will and there’s no apparent back-up kicker.

Indeed, so threadbare are Pat Lam’s backline resources that with just nine fit backs in his registered squad, for the first time the Connacht coach has been obliged to opt for a 6-2 split on the bench, with recent signing, 29-year-old Fijian backrower Naulia Dawai, in line for a potential debut in green.

By contrast, Dai Young has refreshed his starting line-up from a comparative position of strength, fitness and vastly greater resources. Ex-Leinster centre Brendan Macken, scrumhalf Joe Simpson and tighthead Jake Cooper-Woolley come in for Alapati Leiua, Dan Robson and Marty Moore, all of whom are on the bench.

There are plenty of caveats. Can Connacht avoid more injury-enforced disruptions early on? Can their lineout function? Can they take their kicks? If yes on all counts, then they’ve a real chance of causing another upset. Having let bonus points slip in the win at home to Toulouse and in the defeat away to Wasps last week, were they to deny Wasps one it would leave them well placed. But even a win of any hue, could leave them in a three-way tie in 13 points and with everything to play for.

1 Gerry Thornley: Talk of Anglo-French hegemony is over the top
2 What next for green jersey hero Sam Bennett after the toughest of Tours?
3 The Offload: Saracens prove Pro14 is not fit for purpose
4 Shane Lowry brings the X-Factor to an Irish Open like no other
5 Two in custody in Tour de France doping investigation
Real news has value SUBSCRIBE

Doctor Duffy leads the betting for Wednesday’s Kerry National 06:00
Different Strokes: Bryson DeChambeau wants to go further 06:00
Shane Lowry brings the X-Factor to an Irish Open like no other 06:00
Netflix to capture Hamilton’s bid to equal Schumacher’s record 06:00
Ulster GAA warns crowds could be banned after Tyrone pitch invasion 06:00
Crossword Get access to over 6,000 interactive crosswords