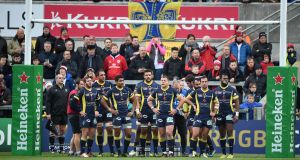 The Clermont Auvergne will be seeking revenge at the Stade Marcel Michelin. Photograph: Charles McQuillan/Getty Images

The round-three meeting, and Ulster’s 39-32 victory, is highly recommended viewing but in the context of the return leg only watch the last 20 minutes. When Clermont woke up. Also when Clermont began to exact revenge on real or imagined slights.

The physicality here will reach angry All Black standards.

Last weekend two of European club rugby’s magicians, Charles Piutau and Wesley Fofana, were in full flight to offset the bruising war up front. This time, all the Top 14 leaders will seek to do is overpower Les Kiss’s forward pack.

Franco van der Merwe returns for the injured Robbie Diack, so one South African for the other, but it is the Irish trio of Rory Best, Chris Henry and especially Iain Henderson that Damien Chouly and pals will target for special treatment.

In the case of Best and Henry, that’s only because they will leave themselves exposed for punishment at countless rucks. With Henderson, well, he will do what he does best and carry into them.

There will be a welcoming party with the noise of the club’s band reacting in tandem.

A surprise result is not inconceivable but as Leinster already proved in the face of an enormous Montpellier pack in October, a bonus-point loss will feel like a victory further down the road.

Ulster, on nine points from three rounds, need something after making a mess of a very winnable trip to Bordeaux.

With Ruan Pienaar and Paddy Jackson both outstanding last weekend – with the outhalf getting a wonderful individual try – there is enough evidence to believe in a positive Ulster result.

Then it becomes a numbers game. If the Ulster players start going down, and not getting back up, then it will prove almost impossible to stay within seven points.

Jared Payne and Andrew Trimble, victims of Ireland’s November campaign, are not unduly missed as Tommy Bowe is back on deck, while Stuart McCloskey is developing into a valuable club centre.

Don’t forget Piutau. With the All Black on the pitch, anything must seem possible to Ulster supporters. Anything, while unlikely, includes victory in the toughest place to escape with a result in Europe.