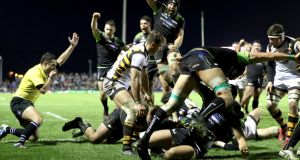 On the back foot for much of the second half, during which they’d seen a 13-7 interval lead erased as Wasps flexed their pecs to go 18-13 ahead, the fat lady was clearing her throat as Connacht dined at the last chance saloon. Cue one final play, a rolling maul and a try for their Fijian debutant Naulia Dawai and cue the hero of the hour, Jack Carty, who completed an unlikely win with the conversion from wide to the right.

The talented outhalf, whose goalkicking has not been as it should have been this, was engulfed by his team-mates and, soon after, hordes of supporters for a good old-fashioned pitch invasion. The Clan Terrace rocked to an impassioned rendition of The Fields of Athenry.

The win ensured a three-way tie between these two sides and Toulouse in Pool 2 on 13 points with two rounds to play. That Connacht could defy the odds on the night is in keeping with their ability to defy financial imperatives given their rivals’ vastly greater budgets.

It was a reward for Connacht’s unyielding spirit and desire to keep going, epitomised by the phenomenal energy levels of Ultan Dillane, John Muldoon and Bundee Aki, as well as some oomph off the bench, notably from Seán O’Brien. There is just something about them and the cauldron that the Sportsground has become.

It was also the reward for an unwavering desire to keep playing, to keep running and passing, even if they turned over the ball a mite too often and it seemed that Wasps’ power and Marty Moore-inspired scrum had beaten them into submission.

Connacht had kicked off on a dry and relatively still night, and home crowd and team alike were given an early boost when Ashley Johnson immediately dropped the ball. What’s more, their loosehead Matt Mullan was promptly pinged for collapsing at the ensuing scrum but as the crowd held their breath Carty missed the kick, 15 metres in from the right touchline as the ball drifted wide to the left.

With Wasps making an edgy start, and spilling the ball twice, Carty was afforded another chance, straight and 43 metres out, when Quinn Roux poached for a penalty after a carry by Jake Cooper-Woolley. This time Carty bisected the posts.

However, after Joe Simpson lost the ball when tackled by Kieran Marmion from an attacking scrum, as was the case last week Wasps were devastating when they got their big men rumbling inside Connacht territory. After Joe Launchbury made the initial inroads, Thomas Young made a half-break and offloaded to Nathan Hughes. Although brought down bravely by Marmion short of the line, Simpson followed up to pick up and dive over in one deft movement. Jimmy Gopperth converted.

Connacht created openings, but Niyi Adeolokun couldn’t hold onto Aki’s offload and when Carty broke the line and veered out to locate Adeolokun, as was also the case on two occasions last week, the tall Wasps left-winger Josh Bassett jumped to pick off the intended skip pass.

Instead, when Johnson drove Aki back in the tackle, the ensuing turnover led to three attacking Wasps lineouts. From the first, Johnson fended off Muldoon but was held up over the line by Tom McCartney and Eoin McKeon. The third also followed a yellow card for Tiernan O’Halloran, after not rolling away. Somehow Connacht survived that, and a rickety scrum and a lost lineout, broke upfield after a huge hit by Dillane on Kurtley Beale when Matt Healy’s offload released Aki for a huge gallop.

Connacht then got their rumblers rumbling, Dillane, Muldoon, Roux et al, to earn the penalty with which Carty trimmed the Wasps lead to a point, thus winning the 10 minutes without their fullback, although they temporarily lost the dangerous Healy, to be replaced by Danie Poolman.

O’Halloran immediately made a couple of strong, goose-stepping carries, after which Simpson conceded a penalty when coming through on Marmion, and Carty went up the line, finding touch within five metres. McCartney’s throw found Muldoon, and they rumbled over the line. In all probability McKeon completed the touchdown but no camera angle could prove as much through the phalanx of bodies, even though no Wasps player appeared to be under the ball. Alas, nor could their scrum control the ball, as Wasps twisted and drove for a valuable turnover.

Still, they kicked to touch 15 metres out, and after an elaborate strike move, Marmion dummying to the blind side before McCartney ran infield and worked a switch with Adeolokun, who broke Launchbury’s tackle. Two phases later, with the Wasps defence sucked in, Carty deftly cross-kicked for Poolman to gather on the bounce in the in-goal area close to touch-in-goal. To cap off his and Connacht’s half, Carty even landed the touchline conversion for a 13-7 half-time lead.

In the resumption, their go-to man Aki quickly had the crowd in full voice and Connacht on the front foot with a couple of big carries, but Marmion’s attempted snipes were twice well read. Even so, after a brief lull, Gopperth skewed a kick out on the full only for Beale to read a midfield move between Aki and Healy to nail the winger and force a turnover.

Soon, Young was using his footwork and strength to good effect again, beating a man and offloading to the supporting Johnson. When Marmion was penalised for not rolling away, Gopperth made it 13-10.

When Marmion cleverly explored the blindside McCartney’s soft hands afforded O’Brien a sidestepping run with his first touch, only for Launchbury to make a trademark poach. A long stoppage then followed when Adeolokun countered and ran into a combination of Cooper-Woolley’s head and chest.

It was a tired, no-arms tackle an hour in from a tighthead on a winger, and it went unpunished. To rub salt in the wound, Moore replaced Cooper-Woolley and the Wasps pack powered through on the ensuing put-in, albeit Gopperth hit the post with the 40-metre penalty.

O’Halloran released Healy, as Connacht attacked from deep, but his hopeful offload infield was adjudged forward before Christian Wade’s more clear-cut knock-on. O’Halloran read Beale’s offload to Moore and Adeolukun turned sharply to make a try-saving tackle on Bassett from Dan Robson’s grubber before a great steal by Aki secured a turnover scrum.

It proved a double-edged sword, Moore and co driving Connacht off their own put-in for Robson’s skip pass to put Bassett over in the corner. Gopperth missed the conversion, and Connacht’s hopes of salvaging a win all but went with another botched lineout following the replacement of both a tiring Roux and McCartney.

However, a charge down by their new 29-year-old Fijian, Dawai, on his debut earned a scrum 30 or so metres out. After strong carrying by the remarkable Dillane and, of course, Aki, and Connacht’s 15th turnover of the game, Muldoon poached for one final penalty just as it seemed Wasps were running down the clock.

With the last roll of the dice Connacht went to the corner, and when Mathieu Raynal (replacing the hamstrung Jerome Garces) signalled that the first drive was held up, Aki and other backs joined in as Connacht reset, peeled off to the blind, Dawai touching down.

So it came down to Carty’s difficult conversion, wide to the right underneath the main stand. As soon as he struck it, his pumped fist and the roar from those behind him told you it was on its way.

Some finish. Some win. It almost defied much of the second-half, but thanks to their resilience and desire, Connacht, if only just, are vibrantly alive.