Munster prove irresistible as Thomond plays its part to perfection 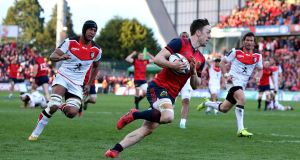 Darren Sweetnam scores a try to seal Munster’s place in the last four of the Champions Cup. Photograph: Bryan Keane/Inpho

This wasn’t perfect but in so many ways it was vintage Munster on another vintage Thomond Park occasion. So while they may have wobbled and Toulouse occasionally scented blood, ultimately Munster were simply irresistible. A 12th semi-final in 21 years duly followed.

The umbilical link between team and supporters made them all but unbeatable again. Toulouse were a different proposition than three years ago, not least with Thierry Dusautoir as a rallying point. But they should have known from that experience that it was of paramount importance not to give the crowd an ‘entry’ into the match.

Significantly, the crowd played a key role in encouraging the officials to take another look at the incident

Instead they were way too tetchy and ill-disciplined for their own good, with number eight Francois Cros coming through late with his elbow just below Duncan Williams’s neck, thus giving Munster an extra man and the territorial stronghold form which John Ryan barrelled over for the opening try.

Significantly, the crowd played a key role in encouraging the officials to take another look at the incident and decree that Cros should be yellow carded, at the very least.

The home supporters played their part too at another key juncture of the evening after Toulouse had made it an eight-point game and, after curiously eschewed a three-pointer to make it a one-score game, came a calling through 14 phases.

In their moment of need, the chants of ‘Mun-ster, Mun-ster’ echoed around Thomond Park and as Yacouba Camara, Toulouse’s leading tackler and carrier who was well shackled by Munster’s fringe defence, lumbered around the corner, with no real apparent intent or support from tiring team-mates, James Cronin lined him up and charged into him. Tommy O’Donnell and Billy Holland followed suit, and the ball spilled. The roar couldn’t have been much bigger had it been a home try.

With that, the Munster scrum steadied, and having played a little too much in the second-half, finally used the wind to kick for territory and chased hard to keep the dangerman Maxime Médard in check. They still had some more defending to do, but mostly in Toulouse territory.

Meat and drink to that defence, and after a harsh penalty against Arthur Bonneval, a looping hospital pass by Piula Faasalele and a huge hit by Jaco Taute on Doussain enabled Darren Sweetman to pounce and score.

In truth, it was their most creative back play of the match, and had taken 79 minutes

As forecast, Munster’s greater athleticism and fitness levels yielded a late dividend, as Rory Scannell danced through and Simon Zebo tipped on a lovely skip pass from Tyler Bleyendaal for Andrew Conway to finish with a flourish.

In truth, it was their most creative back play of the match, and had taken 79 minutes. Their kicking game and at times their discipline let Toulouse off the hook, although it was JP Doyle’s mystifying decision to award Paul Perez a try despite a blatant forward pass from Yoann Maestri, one of Toulouse’s better performers, which allowed the French side back into the match a second time.

But Munster’s superior set-forward play, intensity and voracious defence ensured they were worthy semi-finalists. To limit Toulouse to just five line breaks, seven offloads and one erroneous try (just the fifth Munster have conceded in seven games) was testimony to their aggressive line speed, tackle execution and work-rate in defence.

O’Donnell led the way with 17 tackles, with a dozen apiece from Holland and the two Ryans. The tighthead deservedly made off with the CJ Stander man-of-the-match award. Strong in the set-piece, he opened the scoring and made some huge hits in a big 78 minute shift. He now has two man-of-the-match gongs, having picked up one in the Pro12 win away to the Dragons, which is two more than John Hayes in his entire career.

Peter O’Mahony was immense in his 50 minutes, lording supreme on both throws, while both locks had big games. Donnacha Ryan, who confirmed he would give it everything until the end of the season, made the IRFU’s decision to downgrade him all the more incomprehensible.

As for Toulouse, they showed up with real intent and were competitive, but lacked any real direction in the anonymous Sébastien Bézy and the hapless Jean-Marc Doussain

Duncan Williams ably controlled things from the base, and aside from being a calm and effective playmaker, Bleyendaal was again all but perfect off the tee with an eight-from-nine return for a 21-point haul. Daren Sweetman had real presence on the right wing, and Simon Zebo was near faultless and a big carrier from the back.

As for Toulouse, they showed up with real intent and were competitive, but lacked any real direction in the anonymous Sébastien Bézy and the hapless Jean-Marc Doussain, a far distance from the likes of Jean-Baptiste Élissalde and Frederic Michalak. Doussain kept drifting or taking the ball into contact, and his two handling errors in the final quarter helped Munster twist the knife.

It was an impressive moment to play in Thomond Park for the first time in my career. Unfortunately, it will be a bad memory

Heaven help them when the 35-year-old Dusautoir retires. After what was assuredly his last game in the competition, not least as Toulouse won’t be in it next season, Dusautoir said: “It was an impressive moment to play in Thomond Park for the first time in my career. Unfortunately, it will be a bad memory but it was okay to experience this memory of rugby. Congratulations to the Munster men.”

Class to the end.

However, as expected, they had too many lumbering passengers for the offloading game they strive to play, and, facing a financial deficit at the end of the season and a further plethora of departures and retirements, appear to be in a state of either transition or chasis.

Not so Munster, despite the impending departure of Donnacha Ryan and uncertainty over the future of Rassie Erasmus.

Roll on the semi-finals.