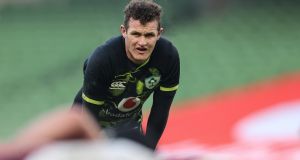 After the disappointment of their first defeat of the season against Toulouse in the Kingspan last weekend, Ulster are in must-win territory in Gloucester on Saturday, but they have been dealt a serious blow with the enforced absence of their talismanic Marcell Coetzee.

The South African number eight and lock Sam Carter have both been ruled out after failing to come through the return to play protocols following head injuries suffered against Toulouse, thus compounding the absence of captain Iain Henderson.

Nick Timoney some in at ‘8’ and David O’Connor joins his brother Alan in the secondrow in making his first European start. Against that Jordi Murphy returns at openside after missing last week’s game as his partner was giving birth, as does the fit again Billy Burns, who captains the side against the club he played with for six years. There is also the possibility of a European debut for Academy fullback Ethan McIlroy off the bench.

Having fielded a weakened side in their 55-10 defeat in Lyon last week, Gloucester have made a dozen changes to their starting line-up as George Skivington recalls internationals Chris Harris, Louis Rees-Zammit, Jack Singleton and Matias Alemanno are all included in the starting team. But it is still a Cherry and Whites side that is missing some key men, such as Jonny May, Ollie Thorley, Willi Heinz and Jake Polledri.

Gloucester have won three of the four previous meetings with Ulster, including both clashes at Kingsholm, but that quartet of games were all back in the mid noughties.

Ulster have also taken a liking to Premiership opposition, winning nine of their last 10 Champions Cup games against English sides, including their last six in a row. Admittedly, three of those six victories were by a single point, but with Burns likely to relish a return to his old stomping ground, they have enough in them to keep their European hopes alive.

Betfair discontinues its association with Gordon Elliott 13:58
Ireland release 13 players for interprovincial clashes 13:38
Former Barcelona president Bartomeu arrested after club offices raided 12:41
Echoes of Berlin 1936 . . . Should Beijing Winter Olympics be boycotted? 10:01
The Offload: Ireland women must be allowed to move with the times 10:00
Crossword Get access to over 6,000 interactive crosswords