New Zealand in rude health as they defend their Championship title 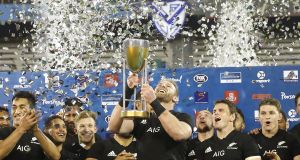 Holders New Zealand face a fresh assault on their Rugby Championship title this year, but for the four sides involved in the southern hemisphere battle, next year’s World Cup in Japan will be front of mind.

The world champions have been the dominant force in the competition with 15 titles, including five in the last six years.

That most recent run was only broken by an Australian victory in a shortened competition in 2015 ahead of the Rugby World Cup that year.

The All Blacks have won all 12 of their matches in the competition since, rarely looking troubled in doing so, and will once again be heavy favourites to lift the trophy this year as their polished squad includes returning captain Kieran Read.

There were few other surprises named by long-serving coach Steve Hansen, with continuity a key positive for the side going into the campaign.

The return of hooker Dane Coles is another, even if he may only be available towards the end of the championship.

Just claiming an All Black scalp would provide a massive boost in confidence for the trio of other contenders, with Australia coming off a poor Super Rugby season, South Africa rebuilding under new coach Rassie Erasmus and Argentina hoping to end a horror run under their new tactician Mario Ledesma.

The Springboks have endured great disappointment in the last two Rugby Championship seasons, but a morale-boosting 2-1 home series victory over England in June was a promising start for Erasmus.

He has promised to build depth ahead of the World Cup by rotating his players through the Rugby Championship, but he is missing stalwart loose-forward Duane Vermeulen, who has been allowed to play club rugby in Japan.

Winning away will be the key to the Boks’ chances of lifting the trophy for the first time since 2009, but those successes have been rare in the recent past.

Hansen suggested last week that Australia would start the Rugby Championship as favourites, a notion scoffed at by even Wallaby coach Michael Cheika despite their victory in the dead rubber Bledisloe Cup clash the last time the teams met.

The side’s chances have been improved by the fitness of influential captain Michael Hooper, as well as prop Scott Sio and winger Dane Haylett-Petty.

Argentina have won just two of their last 18 Tests – against Georgia and Italy – leading to the appointment of former national team hooker Ledesma, who had been praised for his work with the Jaguares Super Rugby franchise.

The 2015 World Cup semi-finalists have fallen well short of that standard and this Rugby Championship will be crucial for underpinning the plans of Ledesma.