Along with much of world sport, rugby will be put on hold until coronavirus crisis has passed 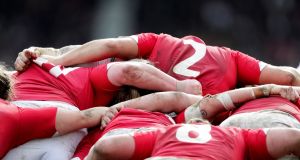 The Welsh Rugby Union had indicated on Friday morning that the Six Nations game against Scotland would go ahead, but were later compelled to alter that stance when calling off the match at 24 hours’ notice. Photograph: Laszlo Geczo/Inpho

Friday the 13th of March is probably the day which, in keeping with much of world sport, marked the end of the rugby season.

Following on from the postponement of Saturday’s Six Nations game between Wales and Scotland, the French Federation and the LNR suspended all rugby playing activity indefinitely in a bid to counter the coronavirus epidemic.

On foot of that, the organisers of the Champions Cup and European Challenge Cup, EPRC, are expected to host a board meeting over the weekend to confirm the postponement of all the quarter-finals involving French and Irish sides in both tournaments.

Although Premiership Rugby has remained curiously quiet, and the English Championship proceeds this weekend as scheduled, it is expected they will follow the example of football’s Premier League (which has suspended all matches until at least April 3rd) in also suspending matches before that competition’s scheduled resumption next week, which means the Exeter-Northampton game will also be postponed.

Sunday’s English Premiership Rugby Cup final between Harlequins and Sale has been postponed after a member of staff from one of the clubs displayed symptoms consistent with the coronavirus.

Uefa has postponed all European Champions League and Europa League matches next week, while even the Augusta Masters has been suspended for the first time since World War II. England’s test series in Sri Lanka has also been postponed, with the English players to return home, while the London Marathon has been suspended until October 4th.

Although the French president Emmanuel Macron had not made any decrees with regard to sports when he ordered the closure of schools and universities on Thursday, early yesterday morning the French Federation president Bernard Laporte announced his organisation were suspending all rugby related activities under its jurisdiction, as the IRFU had done the evening before.

“The FFR suspends from this day all its competitions, rallies and training, as well as those of its leagues, departments and clubs, until the sanitary conditions allow their resumption.”

This followed the example set by the French football authorities, and the rapidly evolving chain of events prompted the LNR to bring forward its extraordinary management committee meeting (originally scheduled for Monday in Toulouse) and suspend the Top 14 and the Pro D2 until at least April 30th.

Two cases of coronavirus were also suspected among employees of the Agen club.

The domino effect saw the Wales-Scotland came also called off. As with the Premier League in England, the Welsh Rugby Union had indicated yesterday morning that the Six Nations game against Scotland would go ahead, but likewise had quickly been compelled to alter that stance when calling off the match at 24 hours’ notice.

By that point Wales had already conducted their captain’s run while Scotland were about to do theirs when the announcement was made. The WRU insists that the government’s medical advice has not changed but that the decision has been taken in the interests of “supporters, players and staff”.

A WRU statement read: “Whilst medical advice remains consistent, we have decided that it is in the best interests of supporters, players and staff to fall in line with recent measures taken across the UK and global sports industries.

“The WRU would like to thank all parties for their counsel on the subject and will make further announcements with respect to rescheduling the fixture in the coming days. Every effort has been made to stage this game and we appreciate that individuals will have been inconvenienced. Given the fluid and unprecedented nature of this issue, a postponement became the only viable option.”

The championship has only remained incomplete once since 1898, namely in 1972 when Scotland and Wales declined to travel to Dublin due to the Troubles, but the organisers and its unions and federations will be desperate to reschedule its four postponed games next autumn.

When Ireland’s three games in 2001 against Scotland (away), Wales (away) and England (home) were postponed, they were all rescheduled for the following September and October. But the then smaller Celtic League was in its infancy and the rugby season was far less congested.

The likelihood is that this weekend’s scheduled round five games (France-Ireland, Italy-England and now Wales-Scotland) will all be pencilled in for October 31st, as that would be on the eve of the November internationals, although it is less clear when the Ireland-Italy match can be fitted into next season’s schedule.