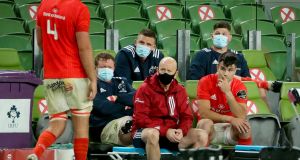 Although the scrumhalf will miss Munster’s opening match in the 2020-21 Guinness Pro14 away to the Scarlets this Saturday due to a thigh injury he sustained in the semi-final defeat by Leinster over three weeks ago, van Graan intimated that Murray might possibly be fit for their second game against Edinburgh at Thomond Park on Saturday week.

“Conor is progressing well. Hopefully, he might be available for selection next week but don’t want to speculate on that,” said the Munster head coach. “He’s got an outside chance to be available next week against Edinburgh but we won’t push him if it’s not 100 per cent ready to play.”

Either way, the indications are that Murray should have recovered in time for the Italian game. Van Graan had a similar prognosis for Dave Kilcoyne, who suffered an ankle injury just eight minutes into the first post-lockdown game against Leinster.

“Dave Kilcoyne is progressing well. There’s an outside chance that he’ll be ready for next weekend.”

Alas, not unexpectedly, there is no clear sign of when Joey Carbery might be on the road back. “No, Joey will be the same for a number of weeks and months. He’s doing very well but no update on the injury.”

Against that, Munster welcomed back Jean Kleyn - following the neck injury he suffered in that damaging first game back against Leinster - and Mike Haley - who hasn’t played since February after sustaining a torn calf in the build-up to those games in August and September - for last Saturday’s Munster A warm-up win over Connacht Eagles in Thomond Park, where 200 fans were admitted.

“So a fair bit of experience and seasoned internationals aren’t available but we’re going to get that through the season so we’re very excited with the players we have available against the Scarlets.”

Beaten in the semi-final stages by Leinster for the last three seasons, looking ahead to the new campaign van Graan said: “From a league point of view, all teams are back to zero points so in order to get yourself in the playoff games, you’ve got to consistently perform week in and week out.

“You’ve got to put yourself in a position to get into a semi-final, which we’ve done for the last four seasons and then hopefully improve as the season goes to get a positive result in a semi-final and get into a final. But that’s a very long way away.

Having signed both Haley and Matt Gallagher since Simon Zebo’s departure for Racing 92 over two years ago, van Graan was decidedly non-committal on the possibility of re-signing their former full-back/winger who, like Donnacha Ryan, has reached the upcoming 2020 Heineken Champions Cup final against Exeter in Bristol.

“Zeebs is doing brilliantly at Racing Metro, it suits him very well. We wish them well for that final. Zeebs and Donnacha are class players and they showed that once again. The future is very uncertain at this stage and we’ll only take it day by day and week by week.”

Munster have been more disrupted than the other provinces due to two separate cases of academy players testing positive for Covid-19 since rugby’s return but van Graan saw this as proof of the system working effectively.

“The very first player that tested positive, that came as a shock to everybody because it was the first case we’ve had. We’re all adapting, it happened again and I will always put the health of the players before performance because we’re all human beings. We’re going to have to live with the virus. The positive cases showed the system worked and the action we took and the squad remaining healthy, that showed the protocols are working.

“You’ve got to have the ability to adapt. You might lose a guy to a temperature check, it’s just the new world and we will have to live with the way things are currently.”

1 Gerry Thornley: After 32 weeks the Six Nations is back up for grabs
2 Extremes of sweet and sour for Solskjaer as Man United show signs of revival
3 Arsène Wenger: Arsenal was a matter of life and death to me
4 Johnny Sexton aware of how Ireland can offer fans an escape
5 Stockdale and Ringrose on board with expansive Irish game plan
Real news has value SUBSCRIBE