‘There’s a few places where we can fix-up, just look after the ball a bit more’ 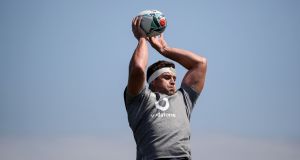 Ireland’s CJ Stander is confident his team can turn it around after Saturday’s defeat to Japan. Photograph: Dan Sheridan/Inpho

The importance of CJ Stander’s durability has been underlined by the unfortunate loss of Jack Conan. Despite the arrival of Jordi Murphy, an option at number eight, Stander is now the only out-and-out ‘8’ in the squad.

The backrow cupboard has become a little thinner in recent times, what with Jamie Heaslip, Dan Leavy and Sean O’Brien all ruled out in the last two years, and now Conan. After Murphy, the only other backrower in the expanded squad back home is Tommy O’Donnell, essentially a specialist openside, although he has played occasionally at blindside in recent times for Munster.

In his first World Cup, Stander has already put together two big 80 minute efforts inside a seven-day period. Only the remarkable James Ryan has more than Stander’s 31 tackles (none missed) or his tally of carries (26) and metres (60).

But Josh van der Flier is looking in even more need of some respite after also putting in two big shifts - he made 20 tackles in his 80 minutes against Japan. Yet although there is only a five-day turnaround, Stander’s presence in front of the media today in their base in Kobe strongly suggests he’ll be playing at least some part once more against Russia on Thursday in Kobe.

He’s certainly good to go again. “Yes definitely, it’s the excitement of the World Cup. This is what you want to do when you’re grow up - be part of a World Cup. So yes, recovery-wise we’re being looked after really well, we’ve got training tomorrow, so we’ve got to make sure the bodies are ready. So if I’m selected I’m good to go again.”

Like many, he’ll want to erase the memory of last Saturday’s below par performance and damaging defeat behind him as quickly as possible.

Asked where it ranked in his career disappointments, Stander admitted: “I’d say it’s close to the bottom. My red card is probably always going to be at the bottom,” he said in reference to the first test in Cape Town on Ireland’s tour of his native South Africa in the summer of 2015.

“But it’s close down to the bottom. But I think it’s something that’s probably good learnings in a place where you don’t get a lot of opportunity to get learnings,” he said, meaning it was Ireland’s one, and presumably only, opportunity to recover from a loss in this World Cup.

First though, the defeat had to be revisited.

“We had a look at it yesterday and a bit today. I think we started well, went two tries up, we had a few opportunities in the first-half, less the second-half when they just took it away from us. There’s a few places where we can fix-up, just look after the ball a bit more and use opportunities. Japan played well, put us under pressure and they kept building on that pressure during the game, especially coming into the second-half.”

Joe Schmidt’s made clear his displeasure with some of the decisions by Angus Gardner in the 9-6 penalty count, although Stander admitted he could have few complaints about the one he conceded when not retreating behind the gain line before pushing up in defence and led to Yu Tamura’s first three-pointer.

“I think there’s a few penalties that were in our control. I gave one away for being offside. It’s just those small things - it’s marginal, something that we can fix. The other ones, we’ve looked at them but we’re sitting here on a Monday and there’s nothing we can do about them. We just need to make sure that we stay crystal clear.”

Conditions on Thursday, despite the 7.15pm kick-off local time (11.15am Irish), are liable to be just as warm and humid, although whereas Japan have the familiarity that comes with home advantage, this time it will be at least as energy-sapping for the Russians.

“There was quite a big difference from the first game to this game,” Stander said of the Scottish and Japanese matches. “It was hot out there but in the first 10 minutes you just forget about it. You have a job to do and adrenaline takes over.”

“It’s just small things like sweat and how to get it off you hands. But it wasn’t that bad at the weekend, it was a bit more (humid) in the Scotland game. We’ve prepared well for it in our pre-season. It’s not really a factor. It’s something that is probably in the back of a few people’s minds but it’s not a big factor for me anyway.”

Rob Kearney and Tadhg Furlong are expected to pass their HIA3s today, although whether they’re involved against Russia in any case remains to be seen.

Murphy’s versatility means he is likely to see him sprung straight into action on Thursday.

“Jordi always fits right in,” said Stander. “He’s been a part of this team even before me so were we’re looking forward to getting him back in.”

“He’s going to bring good balance in our back row. He’s someone who understands the game, someone who will bring a lot of energy. His ball carrying and his defence are very good so we’re looking forward to having him in there.”