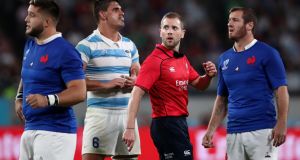 Referee Angus Gardner came under fire from both camps following the game between France and Argentina at Tokyo Stadium in Chofu, Japan. Photograph by Cameron Spencer/Getty Images)

The Offload asked World Rugby’s chief of referees Alain Rolland if any conversations were held with head coaches about the pressure they put on officials pre and post match.

“No,” replied Rolland last week. “We haven’t had a need to have any of those conversations, not at all.”

The World Cup is barely motoring and already refs have been targeted pre game – Rassie Erasmus’s warning to Jerome Garces about the All Blacks getting an unfair advantage – or they are being lambasted after matches for non-decisions.

This is a serious business. In the aftermath of France’s antagonistic victory over Argentina both camps rounded on Australian referee Angus Gardner (we actually thought Gardner did well in impossible circumstances).

The tournament could learn from American sports, who slap coaches and players with heavy fines every time they publicly question a ref’s authority. They also come out and say when an official messes up, and support them when they need it.

It’s called clarity. Following Australia’s victory over Fiji all the loudest voices – including Lawrence Dallaglio on ITV – jabbed the finger at the officials and Television Match Official Rowan Kitt’s failure to punish Reece Hodge’s concussive, and allegedly no arm, tackle on Peceli Yato, an act that arguably cost Fiji a famous victory.

“There are three questions,” Rolland explained. “Is their contact to the head? If yes, was there a high degree of danger? If so, it’s a red card. The referee will look to see if ‘there is an act of mitigation that allows me to bring the red down to a yellow card?’”

Reece has been cited, so the case will be heard, but that’s too late for Fiji.

HIA problems, what next, Joe?

Guessing the team to play Japan next Saturday is tricky but we are beginning to learn that Joey Carbery and Keith Earls could return while Bundee Aki and Peter O’Mahony will struggle to overcome the Head Injury Assessment protocols.

The return of Carbery, considering Johnny Sexton’s suspected groin issue that forced Conor Murray to kick (inaccurately) at goal, seems essential to avoid a slip up against Japan.

“Yeah, Johnny’s fine, thanks,” was all Joe Schmidt would say post match on Sexton.

Don’t expect any accurate information until the team is leaked.

Earls would be a welcome return – no word on Rob Kearney or Robbie Henshaw – but dropping either Jordan Larmour or Andrew Conway doesn’t seem plausible so Earls could wear 23. That means Chris Farrell continues to start at 12 alongside Garry Ringrose.

Rhys Ruddock would be the favourite to replace O’Mahony in the squad with Jack Conan staying at number eight and CJ Stander switching to blindside.

Japan seem like ideal opposition for the mighty Jean Kleyn to dominate but the Ireland team, like most squads, are increasingly going to have little choice when it comes to who plays when. Resting James Ryan, Ringrose, Iain Henderson or Stander is a luxury they may not be able to afford this week.

Anyway, Joey to the rescue.

First the Irish then the English stuck the knife into Scotland. In the build up to this toothless performance Scottish players spoke about unity of purpose and a defensive system they have honed since June. Stuart Hogg even mentioned “winning the World Cup”.

After Sunday’s 27-3 loss in Yokohama, Scotland coach Gregor Townsend got an old fashioned rinsing in the post-match press conference.

“Gregor, it’s a World Cup game,” said the BBC’s Tom English. “How could a team start without ‘energy or aggression’?”

Townsend: “Well, that’s what we are asking each other. The energy was there but it wasn’t as high as has to be against a team like Ireland.

“Whether that wasn’t there in the warm-up or a few players haven’t played for two or three weeks, they had certainly trained really well, but we just missed the start of that game which is very, very disappointing.”

“Sorry Gregor, just to follow up on that,” said English. “There are multiple examples now of the team not starting games with energy and aggression. Numerous examples going back years. What is the problem with these guys?”

Townsend: “There are examples of us starting well in games. If you go back a number of years you can dig out anything really.”

For the tournament’s sake, Japan need to put the Scots out of their misery on October 13th. New Zealand would only annihilate them in a quarter-final.

“We hear everything. We see everything. It’s just one of those things. If you have a bad defensive game people say you can’t defend. If you have a bad attacking game people say you are not dangerous in attack. That’s just part of sport. I like it whenever people slag me off because I get to prove them wrong. That’s my mantra: prove them wrong, and prove them right. I live by that.” – Jacob Stockdale enjoys the read and tackle on Stuart Hogg.