Japan defeat turns into a lose-win situation for Irish fans 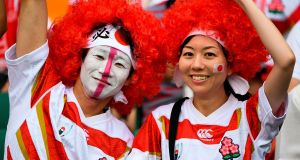 When he grows up, Donal Grace will probably not remember the time he attended a famous Japanese rugby victory in Fukuroi.

He won’t recall his two weeks of being a mini-celebrity in Japan either, a status conferred on him by a combination of babyhood and bright red hair – a very exotic thing in these parts.

But, after Saturday’s red-letter day for the local team, he must have been in danger of adoption as a lucky mascot by the home supporters.

In its various shades, red was also the colour they painted Fukuroi and surrounding areas into the early hours of Sunday, a task in which they were given enthusiastic support from the visitors in green.

Being only nine months old, Donal (born in Clontarf, but Munster-bred on both sides) was not able to contribute much to that. But he was also providing a useful example of how the best-laid plans always need an element of flexibility built in, something the Ireland rugby management may just have been reminded.

When his parents Micheál and Gráinne, along with her friend Marie and his brother Gerald, first thought of making a trip to the World Cup 20 months ago, nobody knew they would have Donal for company.

Extensive as their package was – it involved tickets to all four of Ireland’s group games – a baby was not part of it. But a baby ended up making the trip anyway, then dominating it.

When not busy being a solicitor and father, by the way, Micheál Grace is a noted hammer-thrower, as is brother Gerald. And if they had left their hammers lying around Ecopa Stadium on Saturday, the Japanese would have been sure to throw them at Ireland, eventually. As it was, they threw everything else, including the kitchen sink.

The day was a tale of two Donals, in a way, who between them spanned the entire age spectrum of the Irish support.

If we couldn’t beat the Japanese, Irish supporters decided afterwards, we might as well join their celebrations

Elsewhere in the stands at Fukuroi was Fr Donal Doyle, 88 next month, who grew up in Dublin but has since spent more than 60 years in Japan.

When he first came in the 1950s, this was a poor country, struggling to emerge from the disaster of 1945. But going back as a teaching priest in the mid-1960s, he watched its economic take-off, sparked (it seemed to him) by the 1964 Olympics. The latest leap forward – in the rugby – was a minor thing in comparison. Even so, it came as no great surprise to him.

If we couldn’t beat the Japanese, Irish supporters decided afterwards, we might as well join their celebrations. What had already been one of the friendliest meetings of rival fans anywhere, with a mass exchange of shirts, scarves, selfies and the odd address before the game, became – if anything – more so in the wake of the result.

Some might say that Irish sports lovers of all codes take defeat only too well, as Roy Keane did once suggest in the context of football. But then again, the venue here was called Fukuroi, which seemed significant. And as night fell on the city, the visitors positively revelled in their downfall, while sharing Japan’s glory.

The cultural and shirt exchanges only accelerated. Beer – a mutual love of which is the one great area of convergence between Irish and Japanese culture – flowed heavily. So did songs.

Within an hour of the game ending, this had been transformed into “Stand up for the Japanese”, a tribute accepted with modest amusement by the home supporters, safe as they were in the knowledge that their team had stood up for itself, thanks very much.

Whatever you might think of such paddywhackery, the verse about “shoes off for the Japanese” was more than usually justified.

For first-time visitors to Japan, the past week has been a crash, full-immersion course in the many rules of etiquette, spoken and otherwise, that make life here so utterly different from Ireland.

It has been a week of not talking on your phone in public places, not eating or drinking on trains, not dropping litter anywhere except in bins (if you can find one), and yes, taking your shoes off when entering communal living spaces. For the first time in their lives, thousands of Irish people are now also routinely waiting for the green man to appear before they cross the road.

This mass outbreak of manners is probably temporary and will disappear at the first renewed contact with Irish soil, just as the current pessimism about Ireland’s rugby prospects will be forgotten with another good win.

But you never know. Some of the politeness might just stick. If it does, rugby fans will go home from Japan at least a little more house-trained than they went out.