Andrew Porter: Nothing normal about it but it’s great to be back in training 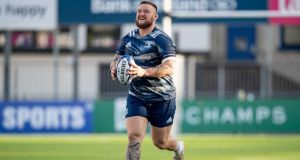 Andrew Porter: “Team sports have always been a big part of my life and what I’ve enjoyed the most. I’ve missed that team aspect.” Photograph: Morgan Treacy/Inpho

It’s been different. I’m not going to lie, our first week back training with Leinster has been a little weird, getting used to all the different protocols that have been brought in and being restricted to smaller groups.

We’re in eight groups of six to eight players and only two groups can be at our High Performance Centre at any one time. We drive in separately to UCD and wait in our cars until we’re called by one of the trainers. We go straight onto the pitch where there are lines marked out. We do our weigh-in at the pitch one at a time as we have to maintain two-metre distancing.

There’s also an automatic temperature check and the way the doctors and the physios have mapped all this out for us is very impressive. We all have our own water bottles, our own towels, our own bottles of hand sanitiser and our own bands for the gym.

Each group has their own skills group and we’ve had Noel Mac [McNamara] this week. We’re not even allowed pass rugby balls to each other yet. Instead we’ve been doing a lot of footwork, evasion and running – it’s all been stripped back to the basics again.

The first groups start at 7.30 and the last group comes in during the middle of the afternoon. I’ve been quite lucky as my group has been in at 9.30 or 10, which is not too early and not too late.

After a group completes its pitch session they go into the gym. Everything has to run like clockwork because then the next group are waiting in the car park and it’s actually worked with precision all week.

Scott Fardy is my group captain, so he’s leading the charge. We also have Jack Conan, Josh Murphy, Scott Penny, Dan Sheehan and myself.

When we transfer from the pitch to the gym we have to take off our own outdoor shoes and put on our own specially designated indoor shoes. Before we do our work-out we clean all the equipment with disinfectant and when we’re finished we clean the equipment again. I suppose you can’t be too careful combating this coronavirus. We want to stay on track for the nine weeks until the run of games from the end of August so we have to be as safe as possible.

It’s incredible to see the shape some of the lads are in. The lockdown appears to have led to some fine-tuning by everyone. The amount of running and sessions they had us doing during the lockdown must have paid off.

I think it was the first time I weighed myself since the lockdown began. It’s gone the way I wanted it to go. I haven’t lost that much, but I’m not going to reveal any numbers in The Irish Times. I’m at where I want to be and I’m feeling good on my feet around the pitch. Lockdown was good to me, I hope.

At least it was nice to get that out of the way on the first day, so it wasn’t hanging over your head for the rest of the week.

We’ve been in lockdown for 13 weeks but it doesn’t seem like that now. It dragged at the beginning and then it flew. It’s great to be back though. I’ve only played rugby and a bit of hurling when I was younger, and team sports have always been a big part of my life and what I’ve enjoyed the most. I’ve missed that team aspect.

We haven’t been together as an entire squad, but just being able to catch up with five other lads was great for the mind and the spirit. We all even had the same stories. Build a gym at home and then every day was the same after that! Everyone thought it had flown by and everyone was just relieved to be back in UCD.

With other measures being eased, I’ll definitely be looking to add to the tattoos. I’ve had a lot of time to ponder where I go next with them! But I’m secretive about those things until it’s done.

I have five as it is. On my left shoulder is a statue that my mum and I went to see in Rome. I’ve got her name, Wendy, on my forearm as well, and a rose and a dove on my forearm. I have another angel on my right arm, a tattoo of Saint Michael – my guardian angel. And I’ve got the Japanese art on my calf.

This might sound weird, but I really like the feel of them when I’m getting them done. I’ve always loved them. I’d say since I was around 10-years-old I was asking my mum when could I get my first tattoo.

I had some of them done in Skin City Tattoo Studio on the quays and the one on my right arm was done in a place called Lost Gallery Tattoo on Capel Street by Valentine, who’s from Lithuania. He’s since become a good friend of mine.

The Japanese one took 32 hours over four sessions in Skin City. I got that done two summers ago. I saw it years previously and started piecing a picture together. These aren’t thought up overnight. They’re like an investment in something that’s going to be on your body for the rest of your life.

The tattoos were less of an issue in Japan during the World Cup than they were made out to be beforehand. I wasn’t allowed into any of the public baths or swimming pools, and in a few of the hotels I had to have them covered up. But that’s all.

I was led to believe there would be problems walking around the cities, but there were no issues. Nobody objected. Well, they didn’t say anything anyway.