Andrew Conway: ‘If you rest on your laurels you’re going to be in trouble’

After excellent performance against Wales, player is looking to work hard and improve 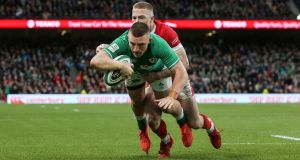 Andrew Conway can’t be defined by numbers alone, although there’s no harm in trotting out that he’s crossed for four tries in his last five Test matches – his most recent against Wales at the Aviva Stadium. His general performance level has been excellent, a testament not only to his talent, but also to his attitude and application in developing as a player.

A personal highlights reel from the Welsh game would incorporate his aerial work, tackling, kicking, work-rate, footwork and ability to make the difficult appear mundane. He worked in off his wing, popping up inside and outside Jonathan Sexton, under the pretext of what he acknowledges as “adding value” in attack.

He’s been encouraged to scan the opposing defence looking for chinks; all the players have been given the freedom, albeit with the responsibility to be proactive in attack and not simply rely on the halfbacks to decide everything, or on preordained calls. There are parameters but there is plenty of scope to jazz up the playbook with a little freewheeling, provided everyone’s on the same page in that moment.

“Scan is the perfect word for it and the main word for us at the moment. We were probably not the best at scanning in the past, heads down and going through three or four phases that we have been guided to do and then leave a lot of the pressure on the 10 to scan, the nine to scan; but that’s everyone’s job.

“When we’re out there it’s largely only us; there are a few messages from the sideline. And then at half-time, we’re very dependent on Johnny at 10, the nine and the pack leaders to own it [the gameplan]. But it’s not just them – it’s on all of us.

“So if the 10 is directing us around the park, it’s incumbent upon the other 14 players to give them messages, having the confidence to tell Johnny you see something and wanting him to play the ball in a certain area for you. Or if they’re [opposition] dropping into the backfield, let’s have a run here. It’s scanning what’s in front of you and scanning who is around you, what spacing you need to get, and then acting accordingly. We will try to get back into the perfect shape then.”

An example from the weekend was Sexton’s decision to run from inside his own 22, releasing Conway in space, who in turn thumped a 40-metre kick that brought play into the Welsh half; a marriage of vision and execution.

Conway, speaking at the launch of Pinergy’s “Free Friday” campaign, smiled when asked about where the Ireland squad would pitch themselves, form-wise, and suggested they were not in the doldrums, where some pundits placed them after the Scotland game, but neither were they “world beaters” having accounted for the reigning Grand Slam champions, Wales.

“We are probably going to be the best team in the world for a week or two until we play England, and the outcome of that will decide what’s written about us after that. It’s trying to remain somewhere in the middle and realise we are on the right path, a good path, got new guys in, and we have to keep looking forward and work hard.”

It’s not the only media sideshow that he’s asked to address.

“Again, we go back to you guys driving the narrative of John Cooney playing well. It’s good reading, it’s a good story to have. One guy playing well up North, another guy with Munster, who are struggling. I’m not saying you are making things up, but it sells papers, I assume. It’s good clickbait.

“Conor [Murray] has obviously taken it on board, has worked really hard and played really well in the last few games. Cooney and Luke McGrath have been playing really well also. People react differently to those types of criticisms. Some people go into their shells, some work a bit harder.

“He’s [Murray] a world-class player but you’re not going to be playing world class every week. That’s not how it works. Whenever people perform underneath that absolutely world-class ability they have, and a rival is playing well at the same time, and kicking goals, that is going to be driven as a topic.

At international level, having a quality all-round game is just as important as those try-scoring elements

“It ended up growing a few legs and becoming a popular debate. And I’m not saying it was an unfair debate. It isn’t, because John was playing some world-class stuff and that’s a fact. But it has definitely driven Conor on to shut a few people up.”

Conway retains a laser-like focus on his development. “You want to have big moments – scoring tries as a winger is the obvious one. But at international level, having a quality all-round game is just as important as those try-scoring elements.

“I’ve been working hard for a long period of time on all of my game. Last week was a good day but if you rest on your laurels you’re going to be in trouble. So it’s just constantly trying to evolve, trying to get better, doing the hard work, the extras. I’m happy with where my form is at currently but I still think there is more to go. There is more growth in me.”