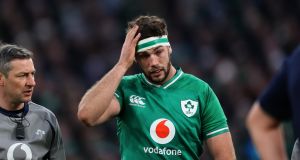 Caelan Doris leaves the field after suffering an early concussion on his home debut against Scotland at the Aviva Stadium. Photograph: Billy Stickland/Inpho

When the dust has fully settled on this Six Nations, last weekend’s match against Scotland match will, unfortunately, be remembered for two awful concussions.

World Rugby is doing its level best to eliminate these, but the force of the collisions is so high now that they are nearly inevitable. Inevitable, but not acceptable.

Referee Mathieu Raynal, who will wish to forget his day at the office, and his TMO did not seem to be connected. I counted four issues which needed to be addressed. Zander Fagerson’s ruck entry into Peter O’Mahony was one of these. As he received treatment there was all the time in the world to have a review, but no suspicions were even raised.

At the time Ireland were defending desperately on their own line, and the referee was playing a penalty advantage to Ireland. Crazy – the best advantage was to apply the sanction immediately.

We then had the even crazier penalty to Scotland after Stuart Hogg, unopposed, had dropped the ball in in-goal, failing to score the simplest of tries. The referee, by going back to the penalty, put the final nail in the coffin of the advantage law. We now know ‘advantage’ is never over.

Hogg failed miserably to score five points, but nonetheless his incompetence was rewarded with three. Nonsense.

Luke Pearce was not challenged as Italy were trounced by Wales. But, in fairness, he turned his volume down and had a good game.

In Paris, Nigel Owens needed to bring all his vast experienced savvy to France v Wales, the best match of the weekend, and he did. That may be his last Test and, if so, he will be missed. In fact, he is refereeing as well as ever, and maybe the powers-that-be will have a rethink. He would certainly be a bonus in the Champions Cup for the huge matches between French and English clubs.

English fans will believe the second French try was the result of a knock-on, as the ball did hit a French hand, despite the officials’ view of things. But then it looked very much that it next went backwards onto the player’s shoulder before it went forward. So, the officials probably got it right, but for the wrong reason.

The English players forgot the old adage of playing to the whistle and stopped, so they have to look at themselves here too.

There will be disappointment, though, that the match officials did not take time to review two incidents. First off, France’s young outhalf Romain Ntamack seemed to be in the air when he was hit and hurt by England’s Ellis Genge. It was a cheap shot.

Next, we had Luke Cowan-Dickie sliding hard into the prone Charles Ollivon after the latter scored France’s third try – this, unsurprisingly, led to a multi-player brawl. The officials needed to check what started it and if they had we were in minimum yellow card territory.

Were these actions motivated by the crass pre-match words of England coach Eddie Jones? Stating that England planned to visit levels of “brutal physicality”, the like of which a young French team would never have seen before, crossed all the boundaries of respect and sportsmanship.

There are few finer men in rugby than Bill Beaumont. He is a former England Grand Slam-winning captain, and currently is chairman of World Rugby. I cannot imagine anything other than he will abhor Jones’ words. He brought the game into disrepute. World Rugby, and indeed the RFU, must surely issue statements to that effect. Silence condones.

In relation to the concussions we saw in Dublin, it’s topical to look at World Rugby’s current trial in Super Rugby and, I think, the Top 14 in France. It’s the high tackle warning. And, in Super Rugby former Test referee Glen Jackson has been appointed to oversee the trial so it is being taken with appropriate seriousness.

It is intended to push for a far better technique and ensure players bend at the waist in making the tackle. Both Caelan Doris and Dave Kilcoyne were in upright positions when they made contact with the ball carrier. Statistics show that 76 per cent of concussions occur at the tackle, and that the tackler comes off much worse in over 70 per cent of such incidents. So, it is driven by hard evidence.

A high tackle warning will be issued post match, and part of the idea is that any player who gets two warnings will receive a one-match suspension. It seems pretty harsh that both Doris and Kilcoyne would now be halfway to a suspension? So, I can see a push back against that element, but it is for the protection of the player and that must take priority.

We will watch the outcome of this trial with interest.

Finally, and I whisper this – there were several side entry penalties given in Cardiff and Paris. But, while these were non-existent in Dublin, that glimmer of light at the end of the tunnel may not after all be an apparition.

We dare to hope.