Geraghty faces up to three months out with fractured arm 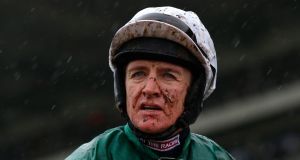 Barry Geraghty is looking at up to three months on the injury sidelines after fracturing his left arm in a fall from Minella Foru in Monday’s Boylesports Irish Grand National at Fairyhouse.

Minella Foru was in the middle of the field when falling at the eighth fence, bringing down Arbre de Vie in the process.

Geraghty missed last month’s Cheltenham festival with fractured ribs and JP McManus’s number one jockey faces another lengthy spell on the sidelines, according to the Turf Club medical officer.

“He has a fractured humerus which is the same injury he had last year except on the other side,” said Dr Adrian McGoldrick.

Earlier on the National card, Geraghty had won the Grade Two Juvenile Hurdle on the 9-2 shot Project Bluebook but his injury meant missing out on another McManus-owned winner, Slowmotion, in the Grade Three mares chase. Mark Walsh successfully substituted.

The McManus colours were also carried to success by White Arm in a handicap chase, providing some consolation to Jack Kennedy who finished runner-up in the National aboard Bless The Wings.

The €100,000 runner-up prize in the National, combined with Samcro’s later impressive bumper victory, meant Gordon Elliott emerged ahead of his trainer’s championship rival Willie Mullins in prize money terms on the day despite the latter scoring a double.

Neither Diakali or Renneti are straight-forward but both were on their best behaviour, especially Renneti who trounced his opposition in the Grade Two Keelings Hurdle.

“He has ability and he happened to be in form today,” said Mullins.

Fairyhouse’s manager Peter Roe reported a Grand National crowd of “just over 15,000” which he said was slightly down on last year. Bookmaker turnover of over €812,000 was also slightly down on the corresponding figure in 2016.