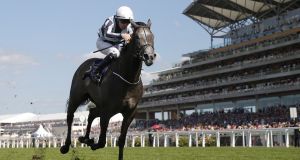 Classic-winning rider Colm O’Donoghue has indicated his career as a jockey may have come to an close.

On Monday, O’Donoghue, who hasn’t ridden since the autumn of 2019, was acquitted of two counts of physical assault on his ex-girlfriend, Jill Macken in 2018, at Carrick-On-Suir district court.

It was established in court that Ms Macken first made the complaints to gardaí in February 2019, a number of days after the relationship between her and O’Donoghue ended.

The 40-year-old jockey, whose classic victories include 2011 Irish Derby on Treasure Beach for Aidan O’Brien, spoke on Tuesday of a “traumatic experience” that he has gone through.

“It has been a traumatic experience. It’s two years of my life gone,” he said.

O’Donoghue, an integral part of Aidan O’Brien’s team for many seasons, has been back working at Ballydoyle stables in recent months.

However, he said a return to race-riding appears to be unlikely.

“As of now I don’t have a licence. I don’t think I’ll be race riding again,” he said before paying tribute to his legal team, barrister Oisin Clarke and solicitor Tracy Horan.

“They have been fantastic, very supportive through the whole thing. I also want to thank Aidan and Annemarie [O’Brien] for their support through everything.

“I’ve been with Aidan since 1995 so he knows me since I was a kid. We’ve always had a very good relationship and I’m very thankful for his support.

“There’s a lot to be said for peace of mind. There’s no future in the past,” O’Donoghue added.

The rider last won a race on the Sir Michael Stoute-trained Clarion, owned by the Queen, at Newmarket on August 3rd, 2019.

Prior to that O’Donoghue enjoyed Group One success around the world, including a notable 2018 campaign when winning four top-flight races on the Jessica Harrington-trained Alpha Centauri.

In court it emerged that the incidents were alleged to have taken place at O’Donoghue’s home in Fethard, Co Tipperary, on October 6th, 2018, and at the Pillo Hotel in Ashbourne, Co Meath, on November 12th, 2018.

The court, presided over by Judge Terence Finn, heard that on the date of the first allegation, O’Donoghue was riding at Newmarket in England.

He provided details of his return flight into Cork that night which showed he had not been in the country at the time the assault was said to have occurred.

The court was shown a WhatsApp message Ms Macken sent to O’Donoghue following their break-up. It stated: “Now to ruin ur life.” O’Donoghue was found innocent of the charges by the judge.

O’Donoghue has ridden for the some of the best known trainers and owners in Ireland and Britain during his career, including the Godolphin handler, Charlie Appleby. He enjoyed notable success for Harrington during a spell as her stable jockey.

Shane Foley took over as Harrington’s rider in 2019 but it is believed that was unrelated to the allegations made against O’Donoghue who has been working as an exercise rider at Ballydoyle since the start of August.