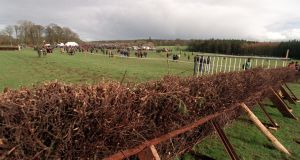 The suspension of the point-to-point season with immediate effect on Wednesday has been greeted with shock within the sector.

Although racing can continue behind closed doors the Government had decided that the point-to-point circuit will have to stop due to the coronavirus pandemic.

A statement from the Irish National Hunt Steeplechase Committee (INHSC) said it received clarification from the Department of Agriculture, Food and the Marine that point-to-points “would not be included in the category of professional and elite sports permitted to continue behind closed doors”.

It means no fixtures can take place until further notice.

The INHSC registrar, Paul Murtagh, said: “On behalf of the Stewards of the INHSC, we note the clarification received today from the Department of Agriculture, Food and the Marine that point-to-points should not take place until further notice, recognising the difficult situation the country finds itself in presently.

“We will now begin to investigate the options available to us around the fixture list and race programming for when we are permitted to recommence.

“We will continue to liaise closely with Horse Racing Ireland on this matter and will remain racing-ready to run point-to-points once we get the green light.”

The current season for a sport, which has a long history of supplying future racecourse stars such as Best Mate and Denman, is due to run until the end of May.

It is a major blow to many within the racing industry and in particular a number of trainers who invest heavily in young stock with a view to racing them in points and then selling them on.

Co Wexford-based Seán Doyle, who along with his brother Donnchadh, operates under the ‘Monbeg’ banner that has sold on major stars such as Monkfish and Holywell, said on Wednesday he hopes the suspension won’t be prolonged.

“It is a big shock. We couldn’t believe the news because it is run so well and so strict in terms of protocols. It’s an outdoor sport – it couldn’t be but safe,” Doyle said.

“We are all shocked but we’re hoping it won’t be stopped for too long. Hopefully in a few weeks things will look a bit brighter.

“We can’t really complain, considering what’s going on in the world, but it is a big shock.”

The clock will be ticking for many owners and trainers hoping to sell on potentially talented stock on the back of impressing on the point-to-point circuit.

“The season usually goes until the first weekend in June but with the big money horses you have to be running them in February, March and April.

“If the ground gets too quick too early it can bring a halt to our season very quick,” Doyle said.

A significant number of jobs are tied up in point-to-points which has led to some disputing whether it shouldn’t be categorised as professional and elite.

“You can argue all day long. But in this case everyone has to look at the bigger picture for now,” added Doyle.

“Hopefully if numbers [of Covid-19 infection] come down a bit we might be one of the first to get back going a bit because we are an outdoor sport and it has been run in such a professional manner.”