Willie Mullins enjoys Grade 1 double at both Leopardstown and Limerick 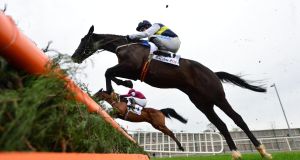 “Since the test result has come back we have had all the staff here at Cullentra (stables) tested and thankfully all tests have come back negative,” Elliott said in a statement.

It means one of racing’s most recognisable figures will be absent too from the behind-closed-doors Christmas action.

It was an unwanted Christmas surprise that may put into context any frustration Elliott endured on St Stephen’s Day when his great rival Willie Mullins enjoyed a Grade 1 double at the feature events in both Leopardstown and Limerick.

When another Mullins hope, Colreevy, made a bad mistake two out, Elliott’s runner, Pencilfulloflead briefly looked in command only for Colreevy to rally and win by half a length at 5-1.

The champion trainer also scored at Limerick with the odds-on Shadow Rider and notched up a 16-1 success at Leopardstown as Dystart Diamond easily landed a handicap hurdle.

Elliott did enjoy a victory in Leopardstown’s main supporting event, the Knight Frank Hurdle, with the ultra-impressive 1-2 favourite, Zanahiyr.

However a day that saw jockey Bryony Frost spring a 20-1 surprise on Frodon in Kempton’s King George VI Chase, on the back of the 1-5 favourite, Epatante earlier getting turned over by Silver Streak, mostly proved to be a Christmas cruncher for punters.

TV viewers might have been forgiven for taking the name of the 40-1 winner of Leopardstown’s handicap chase, Uisce Beatha, as an appropriate option on the back of some of the results.

Limerick’s four days began with Awkwafina springing a 100-1 shock in a maiden hurdle. The first race at Wetherby even managed to trump that with a 125-1 winner.

Ultimately though it paid to once again side with Willie Mullins who ended the day with a double at each of the Irish tracks. During the 2016 Christmas action Mullins saddled a remarkable 22 winners from just 50 runners.

A furious early pace set by Felix Desjy proved too much for the apparent Mullins first-string, Blackbow, who fell at the second.

However, after the face of the race altered dramatically after half-way, with Darver Star taking over in front after Felix Desjy dropped out, Bryan Cooper was determined to play his cards last.

As Felix Desjy rallied, and Embittered had his ambitious run up the inner of Darver Star dramatically cut off on the turn-in, Cooper rounded all his opposition to win going-away.

“That was a nice surprise. He jumped great and capitalised on the very fast early pace which seemed to catch out a lot of the runners.

“Bryan was terrific, just keeping him together and keeping him jumping. He took what was left to him after they went too fast early on,” Mullins said.

What’s generally been left for Cooper since his split with Michael O’Leary’s Gigginstown Stud team in 2017 has been meagre in recent seasons.

After a win on Apple’s Jade at the end of the 2017 season, the Kerry man had tasted Grade 1 glory just once (Latest Exhibition last February) prior to Saturday’s success.

Following the big race Darver Star’s rider Jonathan Moore was handed a four day ban for careless riding due to the incident with Embittered on the run to the straight.

There is an 8.00 morning inspection at Limerick to see if Sunday’s card can go ahead due to a rainfall warning.

Ground conditions are already heavy there but they proved no problem to Colreevy, a Grade 1 bumper winner earlier in her career, who scored at the top level over fences on Saturday.

“She was always very good to jump at home from day one. The aim today was a clear round and hopefully be in the mix over the last two,” reported her jockey Danny Mullins.

Zanahiyr has yet to win a top-flight race but it looks only a matter of time after he made it three from three over flights at Leopardstown.

Jack Kennedy’s mount maybe wasn’t quite as impressive visually as when previously successful at Fairyhouse but it was enough to see him cut to as low as 7-4 favourite for Cheltenham’s Triumph Hurdle in March.

“It was a complete opposite sort of race than the last day. We went very steady and he still won so it just show he can do it any way,” reported Kennedy of a horse that looks the best to date of the three year old crop.

“He only did what he had to. Quilixios (stable companion) is very good as well but I think he might edge him,” Kennedy added.

Gordon Elliott also got a boost with Wide Reciever’s earlier win in a maiden hurdle at Leopardstown.

However news of his positive test for Covid-19 starkly underlined once again the singular circumstances of this year’s Christmas festival action.