Potential crowd ban until late 2021 a grim outlook for racecourses 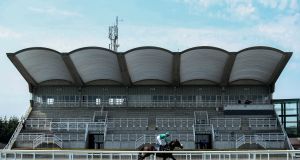 Making sure Ireland’s racecourses remain open will be the most important result of all for the sector in 2021.

That’s according to the Association of Irish Racecourses’ chief executive speaking on the back of Taoiseach Michael Martin’s prediction that it will be the autumn of next year at least before sporting events can be held again with crowds in attendance.

The Taoiseach’s warning that Covid-19 vaccines are unlikely to be widely available until mid-summer, and his “optimistic view” that sporting events can be held in front of crowds by the autumn, represents a grim outlook for the country’s 26 racecourses.

No paying customers for the last nine months has put some major tracks, in particular, under pressure. Horse Racing Ireland has said the survival of racecourses is an area of primary concern and closures, should the impact of Covid-19 continue for a second year, can’t be ruled out.

Hopes that a vaccine rollout might allow attendances in the early part of the New Year now appear to have faded as the impact of the pandemic is likely to result in more restrictions being imposed after Christmas.

The Taoiseach’s prediction tallies with a view previously expressed by AIR boss Paddy Walsh that racing is likely to have to continue behind closed doors for the first half of 2021.

On Sunday Walsh described the situation as “very challenging” for Ireland’s racecourses.

“The trick with these things is to be there when it’s all over. That’s the real challenge. Once you can do that you can look forward to the future with some hope,” he said.

“Racecourses are not money-making machines. Generally speaking most of the money is ploughed back in terms of facilities and improving racing surfaces. So they don’t have huge amounts of reserves.

“They have a few quid in reserve for rainy days but a lot of this would have been eaten up with rainy days last year (2020.) If they have another rainy day this year (2021) it’s going to be that bit more challenging,” Walsh added.

On Friday HRI announced in its 2021 budget that there had been “better than expected media rights revenue” this year.

However, a day later the UK government announced greater Covid-19 restrictions, including the closure of betting shops, which is a blow to that revenue stream for tracks here.

“The saving grace we’ve had in 2020 has been we’ve had some media rights income coming in that maybe other sports don’t to the same extent. We benefitted from the streaming effect and that was a help.

“But with the situation in the UK as of now there are a lot more of the betting shops closed. That has a direct impact on media rights income,” Walsh said.

“It’s an ever-changing situation. You can see what happened in the UK yesterday. Nobody expected that.

“But it can change for the worse or the better. Touch wood, we will have some unexpected days in the future when the news will be good rather than bad.

“We want to get people back racing as soon as we can. But we will do it in a safe environment. If that means we can get earlier than we think then great; if it’s later we will have to go with the flow.

“We didn’t have this hope with the vaccine this year. We do have it for next year. That might change everything halfway through the year. Or even if we had a definitive end in sight, that changes the ball park today in terms of attitude and we can take a bit more pain to get to the line if we have to,” he added.

In other news, last season’s Champion Bumper winner Ferney Hollow has been ruled out of the Cheltenham festival in March due to injury.

The Willie Mullins-trained star beat Bob Olinger on his hurdling debut last month but a spokesman for his owners, Cheveley Park Stud, confirmed on Sunday: “Ferney Hollow has a suspected stress fracture.

“Although nothing is immediately visible on his x-rays that is often the case with a stress fracture and so we are treating it as such.

“Sadly he will miss the Cheltenham festival. We hope he might be able to make it back for Punchestown but we’ll have to see.

“It’s very frustrating but he’s very special so we’re being conservative with him.”