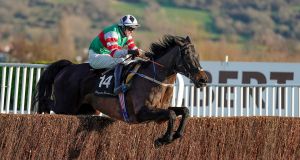 Plans for Chatham Street Lad are “wide open” but his trainer Mick Winters isn’t ruling out shooting for the Grade One stars in the Ryanair Chase at the Cheltenham festival in March.

Some firms installed Chatham Street Lad as low as 14-1 for the Ryanair after his impressive 15-length rout in Saturday’s Caspian Caviar Gold Cup.

Ireland’s National Hunt handicapper has responded to that performance on Monday by hiking the horse a stone in official ratings to a new mark of 151.

If that makes lining up handicaps an onerous looking task for the future then it also leaves Chatham Street Lad with a major task should he get pitched into top-flight company, either in novice company or in open competition.

The reigning Ryanair champion Min is on a rating of 169 on the back of his latest Grade One success in the John Durkan Chase earlier this month.

For the moment though, Winters and Mayo-based owner Vivian Healy are relishing their memorable weekend success where Chatham Street Lad confounded 16-1 odds to win in style under jockey Darragh O’Keeffe.

Co Cork-based Winters attracted plenty of headlines with his colourful response to a first victory at the home of jump racing but is content to bide his time and consult with the owners before considering any new course of action.

“I’ll talk to the owners and see what race suits them. More than likely we’ll enter him in a good few races, wherever the owners will settle for. I’d like that they squander a bit of money and enter him about!

“I was probably a little bit apprehensive about travelling, and there’s plenty of prizemoney at home. But he handled everything and Cheltenham suited him down to the ground. The two mile and five was no trouble to him and he might be slightly better going left-handed.

“Handicapping might be a concern because you’re 150 or whatever. But he appears to have come out of it very well so we’re going to enjoy him,” Winters said on Monday.

Potentially one run after Christmas could be the route back to Cheltenham for Chatham Street Lad who Winters is convinced is still on the upgrade.

“He’s only had six or seven races in his life over fences. He’s an eight-year-old who’s had time to develop so he’s had a very easy lifestyle. So, the way he did his job on Saturday, you’d wonder what will happen the next day with him.

“Now the form of the race might be a bit false. But two mile five is probably perfect. Ground permitting will be a big thing – an ease is important. The ground was beautiful on Saturday and we’ll be on Cloud 9 if he can back it up ,” he said.

“After Christmas, if he gets another run, and then we’re heading across the water, it would be fantastic.

“The owners will be studying it hard. I’m open-minded [about what to do]. Min would be very near to the top [in the Ryanair ratings] and he might be a level away. But the horse is only eight, with no mileage and he’s had a very easy career got so far,” Winters added.

In other news Gordon Elliott’s Sire Du Beralis and Ronan McNally’s The Jam Man are two Irish runners still in contention to line up in this Saturday’s Grade One Porsche Long Walk Hurdle at Ascot.

A total of 14 remain in the three mile highlight after Monday’s forfeit stage, including the two top-rated stayers in Britain, Paisley Park and Thyme Hill who fought out a good finish at Newbury last time.

Initial bookmaker reaction was to make Thyme Hill a 7-4 favourite to confirm that form while Sire Du Berlais is a 5-1 shot to successfully graduate to Grade One level.

The JP McManus-owned runner, twice winner of the Pertemps Final at the Cheltenham festival, returned to action when winning the Lismullen Hurdle at Navan last month.

Sire Du Berlais was half a length too good for French Dynamite on that occasion after Ronald Pump came down at the last flight.

Cross-channel trainer Dank Skelton has confirmed that the recent Wetherby winner Roksanna will take her chance in Saturday’s race.

“I’m really happy with her and she looks fantastic. The lad who rides her out every day says she feels as good as she could.

“We are going to take on the front two from Newbury which is the next level. They have got to give 7lbs to her and over three miles in what is likely to be soft ground that will be telling.

“I never had any intention of going to Newbury. The plan was always to go to Wetherby, then to Ascot. It’s going to be a good race,” Skelton reported.