Irish trainers turn to French jockeys due to Covid-19 quarantine 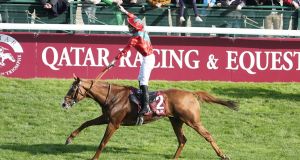 Donnacha O’Brien has snapped up the services of Pierre-Charles Boudot for his French Oaks hope Fancy Blue this Sunday.

Travel restrictions due to the coronavirus pandemic have forced O’Brien to ‘shop local’ when it comes to riding arrangements for the Prix de Diane at Chantilly.

Fancy Blue was ridden by Declan McDonogh when a two length runner up to Peaceful in the Irish 1,000 Guineas at the Curragh but Boudot will be entrusted with the mount this weekend.

Not surprisingly O’Brien has moved to engage him for the ride on what would could emerge as a first classic success in his first season with a trainer’s licence.

The 21-year-old retired from the saddle last year having won back to back jockeys championships and landed nine Group One victories during a short but spectacularly successful career as a rider.

“Pierre-Charles Boudot will ride for me hopefully. Of course we’d love to have one of our own riders but he’s a top jockey, up there with the best of them in Europe and he knows these tracks very well.

“I don’t think it’s going to be a disadvantage. I don’t know him very well, just to say ‘hello’ to ,but I’ve no concerns about that,” O’Brien said on Tuesday.

Just 13 fillies remain in the extended mile and a quarter race which will be run on the same card as the French Derby, the Prix Du Jockey Club, due to a revamped programme dictated by Covid-19.

Travel restrictions, including the 14-day self-isolating rules involving anyone entering Ireland, means another intended Irish runner in the Diane, Jessica Harrington’s Alpine Star, will also have a new jockey on Sunday.

The Coronation Stakes winner is owned by the Niarchos family and Harrington explained on Tuesday: “They have their retained jockey there, Stephane Pasquier, and he will ride. So that’s been easy for me.”

Aidan O’Brien has also opted to send his Irish 1,000 Guineas heroine Peaceful to Chantilly rather than join her stable companion Love in Saturday’s Oaks at Epsom.

Both she and Alpine Star figure towards the top of the betting for Sunday’s race although both will be tackling a trip over a mile for the first time.

Fancy Blue is a an 8-1 shot but Donnacha O’Brien is confident of his filly’s stamina at the new trip.

“She is in good form, everything has gone well. I think the race will suit her so I’m hopeful of a big run,” he said.

Both French classics have been delayed due to the global public health emergency. The Prix Du Jockey Club is a month later than normal while the Diane usually takes place in mid-June. The logistics of getting overseas horses to race in France is also tricker than usual.

“It’s a little bit funny with the lads looking after her. They might have to quarantine for two weeks when they get back but that’s an understandable situation. We’ll do what we have to do,” O’Brien added.

Aidan O’Brien could now try to fill in the two glaring gaps in his European classic CV on Sunday although the picture may not be fully clear until Thursday when final declarations are made for Epsom.

O’Brien Snr also has seven Derby entries but two of them, Armory and Mythical, are among 20 entries left in the Jockey Club.

Ireland’s champion trainer has seven Epsom Derby wins to his credit and double that haul in the Irish Derby.

However despite having runners in the French Derby since 1997 the nearest he has got to landing the Jockey Club was in 2015 when Highland Reel was runner up to New Bay.

The Diane has also proved elusive but that has been the case for everyone since the sole ever Irish trained winner of the race, Seamus Mc Grath’s Sweet Mimosa, all of 50 years ago.

Vincent O’Brien’s Caerleon in 1983 was the last Irish winner of the French Derby, adding to Assert’s victory a year earlier for O’Brien’s son, David.

France’s top trainer Andre Fabre has won the race four times and dominates the top of the betting this Sunday with both Victor Ludorum and Ocean Atlantique.

Victor Ludorom was successful in the French 2,000 at Longchamp on his previous start and is a general 9-4 favourite to complete a classic double.

1 Game Changers: Gary O’Toole took a stand when others turned their heads
2 Chelsea talk the talk but still struggling to walk the walk
3 Georgia and Fiji in line to join Six Nations sides in eight-team tournament
4 The Offload: All eyes on Leinster’s academy intake
5 Andy Moran on moving on from a Mayo career that glowed golden to the end
Real news has value SUBSCRIBE