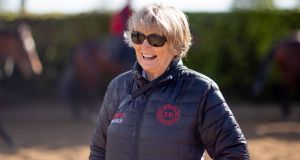 Jessica Harrington and trainers aged over 70 can return to the racetrack from Wednesday. Photograph: Morgan Treacy/Inpho

Jessica Harrington is among those eager and now able to go racing again on Wednesday.

As part of new relaxed protocols released by Horse Racing Ireland last week in relation to its coronavirus restrictions, the ban on those over 70 attending behind closed doors is removed from Wednesday.

The adjusted Covid-19 protocols mean that some of Ireland’s best known trainers will be able to watch their runners first-hand for the first time since racing resumed here on June 8th.

That restriction was a source of frustration in some circles and Harrington, 73, whose string has been in flying form over the last few weeks, has a choice of venue for her racing return.

She has a handful of runners at Tipperary’s National Hunt fixture as well as six hopefuls at Leopardstown’s flat meeting.

“I am definitely going racing,” she said. “It (the restriction) was what it was and we had to do what we were told.”

Other leading figures over 70 with runners at Leopardstown include renowned names such as Dermot Weld and Jim Bolger whose Relaxing Mode looks to hold good claims in one of the handicaps.

Harrington is represented in both Group Three highlights including by Masteroffoxhounds who lines up in the Amethyst Stakes.

He won his maiden on the day racing resumed at Naas and now steps significantly in grade. The one to beat may be Sinawann, sixth to Siskin in the Irish Guineas .

The latter’s stable companion Ridenza makes her first start of the season in the Derrinstown Stud Fillies Stakes.

Her sole career start suggested a filly of some potential but the ratings standard here is set by So Wonderful. Still a maiden in ten starts her third in the Irish 1,000 is standout recent piece of form.

Nevertheless, Halford said of Ridenza: “We had hoped to run her in the Guineas (Curragh) but the ground was too quick on the day so we decided not to risk her.

“It looks a strong race but we look forward to getting her back and getting her started. I’m sure we can plan from there then but she’s ready to start.”

Reverberation makes a quick return to action in a mile handicap having won by four lengths at Fairyhouse last Thursday.

He has been raised 12lbs for that but has just a 6lb penalty on this occasion. Even with a wide draw that might not be enough to stop Reverberation following up.

Sunday’s action at Naas could see a rare cross-channel runner this season with Tim Easterby having given his impressive Royal Ascot winner Art Power an entry in the Group Three Coolmore Lacken Stakes.

Art Power landed a valuable handicap in style at Ascot last time and his trainer reported: “We are currently studying the entries and logistics for the weekend.

“Art Power is in good form, he has come out of his Royal Ascot win very well and I’m happy with him. He is a very exciting horse to train.”

1 Tipping Point: DeChambeau’s transformation raises questions, but who will ask them?
2 Monica Seles: The warrior queen who could have been the best ever
3 Mental clarity in chaos: Novak Djokovic, the man who turned two into three
4 Tottenham take the gift of Keane’s own goal and grind out the rest
5 Lewis Hamilton: I was ‘silenced’ over Colin Kaepernick
Real news has value SUBSCRIBE