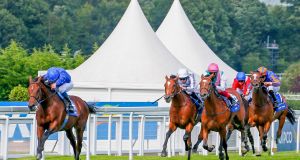 Enable (R) and Japan can’t reel in Ghaiyyath in the Coral-Eclipse at Sandown. Photograph: Mark Cranham/Getty/AFP

Enable, the ten-time Group One winning mare, began her campaign towards a potential third Prix de l’Arc de Triomphe in Sandown’s Eclipse Stakes but the evens favourite couldn’t get to grips with the 9-4 winner Ghaiyyath.

Like Serpentine’s Epsom Derby success on Saturday, the race was dominated from the front by Ghaiyyath whose jockey William Buick gradually upped the tempo in the straight.

Aidan O’Brien’s Japan was first to take a crack at him but when Frankie Dettori brought Enable with her run it briefly looked like she might overhaul the leader.

However on her first start since finishing runner-up in last year’s Arc, Enable struggled from a furlong down and only held off a rallying Japan by a head.

Enable’s Arc odds immediately lengthened and although Ghaiyyath has Group One winning form at a mile and a half Buick suggested the five-year-old may be best atten furlongs.

“As a horse you go with what Ghaiyyath wants to do. He’s not a horse who likes to be controlled. You just sit against him, let him use his huge stride and go when he’s ready.

“He’s a joy to ride and a very, very good horse. As a five-year-old he’s mature physically and mentally. He’s becoming the finished article.

“I think a mile and a quarter will be his optimum trip. He’s very fast. Sometimes when you ride him over a mile and a half you’re always worried the last furlong is going to be a long one but he keeps going,” the jockey said.

Despite defeat Gosden was taking positives out of Enable’s performance.

“I’m delighted with the way she came there. Frankie said the last half furlong she just needed it so he looked after her. It is the perfect platform for the King George.

“She enjoyed it and her zest and desire is there. But trying to get involved with a front running horse like him was never going to be her deal.

“She is an older mare and it has taken a great deal more to get her to this point. But she has run a beautiful race and I couldn’t be more thrilled with her. We knew coming we were 85 per cent and you are not going to beat a front running horse like that around here,” he said.

The former French champion jockey Ioritz Mendizabal was on board the 7-1 shot who briefly looked to struggle amongst horses a couple of furlongs out but quickly put the race to bed once securing room.

The Summit, a 25-1 outsider was runner up, while the 13-8 favourite Victor Ludorum was third.

“I was told, and I saw on the videos of his races, that he carries his head quite low and I just needed to gather him together halfway up the straight. But when he picked up he had it won in two strides,” Mendizabal reported.

Gosden has twice won the Epsom Derby with Benny The Dip (1997) and Golden Horn five years ago. He also landed the Irish Derby in 2015 with Jack Hobbs.

Aidan O’Brien’s Order Of Australia cut out the early running in the Chantilly classic but faded to finish seventh. O’Brien’s other runner, Fort Myers, beat one home.

Mishriff was made a 20-1 shot for the Prix de l’Arc de Triomphe at Longchamp in October.

Richard Keogh makes return by signing for MK Dons 10:25
England scrap sevens programme due to Covid-19 fallout 09:14
Manchester City now facing a rejuvenated Real Madrid 08:00
Bryson DeChambeau’s driver snaps on seventh tee at US PGA 07:28
McIlroy and Lowry in the mix at US PGA; Farrell knows Ireland will need to adapt 07:11
Here is your handy guide to sport on television this week