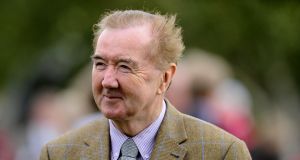 Willie Mullins dethroned Dermot Weld as the Galway festival’s top trainer a year ago and the jumps supremo expects to mount a similarly powerful challenge during next week’s action.

Mullins confirmed on Tuesday that the well-backed Max Dynamite will have his first start in over a year in the €300,000 Guinness Galway Hurdle, a race in which he was runner-up in 2015.

He also indicated that Shaneshill will have his first start over fences in almost 18 months in the Tote Galway Plate.

The pair are set to be part of a near-25 strong team Mullins anticipates will head west from his Co Carlow base over the seven days and they will have plenty to live up to from 2016.

Ultimately Mullins recorded three more winners than Weld and it was the second year in a row he topped the winners list at Galway.

In 2015 he had eight victories, one more than Tony Martin while Weld scored just five times. However, Weld edged Mullins to the Leading Trainer award by a single point (57-56) on a points based system that takes account of placed efforts.

Weld has conceded his recent poor stable form rules out any return to Galway dominance and his rival is red hot 1-2 favourite to retain the top trainer award this time.

“It was nice to do it last year. It’s a good meeting to be successful at and I was delighted to follow in the footsteps of a trainer like Dermot,” Mullins said.

Ivan Grozny was an impressive flat winner at Galway last year but Mullins’s principal focus is invariably on the jumps and it has been Max Dynamite’s likely participation in the big hurdle which has been interesting punters after the release of Monday’s weights.

Max Dynamite was runner-up to Quick Jack in 2015 but was a transformed character on the flat later that year, finishing with an unlucky second in the Melbourne Cup.

He hasn’t run since finishing out of the money in last year’s Ascot Gold Cup but was backed into 7-1 favourite with Paddy Power after the weights were released. Max Dynamite is on a mark of 141, just 5lbs higher than the 2015 race, his last start over flights.

“He goes for the Galway Hurdle and I’m happy with him again. He’s had his troubles such as pulled muscles and being lame but he’s fine again now and working well,” said Mullins who has seven entries left in Ireland’s most valuable hurdles prize.

They include last year’s winner Clondaw Warrior and the Grade One-winning mare Airlie Beach although she isn’t certain to line up.

“She might find this tough off her mark,” Mullins said.

It is Shaneshill’s steeplechase mark of 153 in the Plate that could prove of interest to punters after his exploits over hurdles in France earlier this summer.

Shaneshill won the Prix La Barka from L’Ami Serge and was subsequently third to the same horse in the French Champion Hurdle at Auteuil.

He hasn’t run over fences since finishing runner up to Blaklion in last year’s RSA at Cheltenham and is among the leading market players for the Plate.

“I hope he is but even though he has a lot of experience, most of it is over hurdles rather fences. But we will let him take his chance. Townshend could be well handicapped too but he lacks a little experience as well,” he added.

Mullins’s representation next week could also include Riven Light in the big mile handicap on Tuesday but his principal flat focus will be cross-channel where Wicklow Brave is set to take on Big Orange in the Group One Goodwood Cup.

Wicklow Brave was fourth in the race last year but subsequently won an Irish Leger and scored a top-flight success at the Punchestown festival. His last start was when second to Rekindling in the Curragh Cup earlier this month.

“I thought he ran a cracker at the Curragh and I think if he reproduces that sort of form later in the season in Ireland there can be another big day in him,” Mullins said.

“We were fourth in Goodwood last year with no excuses and I think it’s a better race this time. So I would be delighted if he could pick up some of the fantastic prizemoney again,” he added.

“If I was serious about Galway I wouldn’t have gone to Market Rasen,” said Nicholls who could however send Zubayr for the big hurdle prize.

“He is in the Galway Hurdle and is probably going to go. He has run well on the flat twice. He loves decent ground it’s a big prize. I’ve already won a Galway Plate and it would be nice to win a Galway Hurdle,” he added.