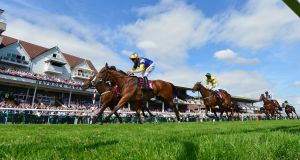 Racing at Haydock on Friday was abandoned after a stalls handler was taken by air ambulance to hospital after being injured in an incident involving the stalls before the fourth race.

The remainder of the meeting was called off, with the final race run being the 2.55.

“There has been an accident involving a stalls handler and the stalls. He’s been been flown to hospital off site in an air ambulance, so we’ve abandoned racing,” said clerk of the course Kirkland Tellwright.

The stewards held an inquiry, at which they interviewed the race starters and Tellwright, who represented the Racecourse Executive.

Tellwright informed the stewards the executive had taken the decision to abandon the rest of the card as “the police had been informed of the accident and were due to arrive at the track to conduct their inquiries”.

Tellwright gave an update on the injured stalls handler.

“He was flown to Whiston Hospital where he is in intensive care,” he said.

A decision has to be taken as to whether the meeting scheduled for Saturday evening takes place. It will be made by the racecourse executive in conjunction with the British Horseracing Authority.

“There are various hoops to go through. I don’t know the answer to that,” said Tellwright.