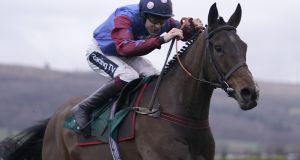 Aidan Coleman guiding Paisley Park to victory in The galliardhomes.com Cleeve Hurdle at Cheltenham in January. “The form is there. It’s the best English form. He has improved with every run.” Photograph: Alan Crowhurst/Getty Images

The English part of Cheltenham is desperate for Paisley Park to win the Stayers Hurdle. The story of his blind owner Andrew Gemmell has captured many hearts. There’s no one more desperate for the horse to win though than his Irish jockey.

It’s 10 years since Aidan Coleman’s only previous festival success. That came on Kayf Aramis in the Pertemps Final. In 2016 the Co Cork-born rider partnered Any Currency to win the Cross-Country only for the horse to be subsequently disqualified for failing a drugs test.

Coleman is well established among Britain’s leading jumps jockeys with over 800 career winners. When the evergreen champion jockey Richard Johnson does eventually retire, Coleman is regarded as a potential successor to the title.

It’s also ten years since Coleman famously got it wrong in the Grand National, deserting the 100-1 winner Mon Mome in favour of a stable companion that fell after just seven fences.

The resilience required to bounce back from such a blow is stamped all over his career since. It includes major handicap victories such as the 2014 Welsh National on Emperor’s Choice.

So it was a surprise to many that Coleman’s first ever Grade One success came on Paisley Park in the Long Walk Hurdle at Ascot in December. He himself claimed to be almost embarrassed at how long it took him to notch a top-flight winner. Now Paisley Park is favourite to give him a championship win.

“It’s impossible to explain how difficult these races are to win, ridiculously difficult,” Coleman says.

“Paisley Park was my first Grade One winner out of 100 Grade One rides. And the only time I got close before was beaten a head in the Champion Chase a couple of years ago.”

If Coleman finds it impossible to explain then it’s a safe bet anyone else can’t. The 30-year-old from Innishannon near Cork city cuts an impressively fluent figure. It’s not difficult to see the self-confidence of someone who’s made it in racing without deep family roots in the sport.

Both his parents are schoolteachers and it was Coleman’s older brother Kevin who fostered his love of the game. Growing up, Classic-winning flat jockey Wayne Lordan was a neighbour. It was the thriving pony racing scene that nurtured all of them.

Kevin’s riding career was highlighted by a 2007 Galway Plate victory on Sir Frederick. The struggle on Ireland’s fiercely competitive scene however meant he advised his younger brother to try his luck in Britain. Not that much encouragement was required.

Having made a point of going to his father’s school in Bishopstown because Transition Year wasn’t compulsory there, Coleman did his final Leaving Cert paper on a Friday and on Monday was working for Henrietta Knight in Lambourn.

“Believe it or not, considering what I do for a job, and without wishing to sound cocky, I was very good academically. I got good Leaving Cert results and all that. But I hated school with a passion. Even looking back now I cringe,” he recalls.

“I wanted to learn about racing and at Henrietta Knight’s I had so much to learn. Hen’ took me under her wing. There weren’t a lot of rides but she was unbelievable with schooling and the grounding she gave me. She also helped me get a job with Venetia,” Coleman adds.

Mon Mome’s trainer Venetia Williams has been instrumental to Coleman’s career, giving him the ammunition to become conditional champion jockey a decade ago. His first winner without a claim was Kayf Aramis’s festival victory.

John Ferguson’s brief but hugely successful training career over jumps subsequently helped propel Coleman into the top rank. He rode 129 winners during the 2015-16 season, behind only Johnson.

Grade One success proved elusive however. Fox Norton came up a head short of Special Tiara in the 2017 Champion Chase. It left Coleman torn between his ambition and acknowledging how his realistic chances of winning these top races were slim.

Paisley Park however has emerged as a perfectly realistic favourite for Thursday’s Stayers Hurdle, armed with as many form credentials as well-wishes.

Gemmell’s story – the former trade union official, blind since birth, who latched onto radio racing commentaries as a child – has generated enormous popular support behind the horse.

Coleman is invested in the story more than most. But he is also coldly logical about his chances of winning a race that would be the highlight of his career.

“The form is there. It’s the best English form. He has improved with every run this season, officially on paper, and even if he doesn’t improve anymore he’s still a top class horse.

“You have to respect what Faugheen has done in the past and at three miles he could be anything. But I’m very hopeful,” he says.

If Paisley Park wins, his owner will be the focus of Cheltenham’s attention. No one will be happier though than his jockey.