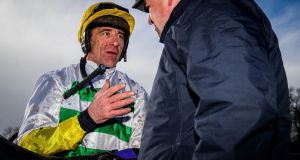 What wins the Champion Hurdle? Buveur D’Air has been treated with some disrespect but I think he’ll do three in a row. Course form is huge and while I love Apple’s Jade she has been beaten in the Mares and the Triumph.

What wins the Gold Cup? I had a feeling Road To Respect might have been the one but he was ground dependant. I'd love Presenting Percy to win.

Bet of the meeting? I don’t think a long lay-off will be any problem to Benie Des Dieux in the Mares Hurdle.

Lay of the meeting? I think Faugheen will roll back the years in the Stayers. So I’ll say Paisley Park.

Most looking forward to? I love everything about Cheltenham. The Champion Hurdle looks great and I’m looking forward to seeing how Enda Bolger does against Tiger Roll in the Cross-Country. But if Faugheen wins it will bring the biggest roar of the week.

Businessman and owner of Presenting Percy

What wins the Champion Hurdle? It’ll be a great race and any of the three favourites will be a worthy winner. But it would be a perfect conclusion to a fantastic season for Apple’s Jade.

What wins the Gold Cup? Obviously I’d love only one result. But looking at it from an ante-post point of view, I think 25-1 each way about Shattered Love is fantastic value. I can’t see her out of the first three or four.

Bet of the meeting? I backed Presenting Percy for the Gold Cup before last year’s RSA. I got 50-1 for smallish money. I also like Cartwright for the Martin Pipe.

Lay of the meeting? I wouldn’t feel good wishing anyone bad luck – it might be catching!

Top jockey? It has to be Davy Russell!

What wins the Champion Hurdle? It won’t be Buveur D’Air! I was a real Laurina fan until she ran the last day and I didn’t think she jumped with any great fluency. So Apple’s Jade for me.

What wins the Gold Cup? Presenting Percy. Davy Russell says fitness isn’t a worry and that’s good enough for me. Some athletes benefit from racing a lot and others from racing infrequently. It depends on the athlete. So I’m not worried he hasn’t raced over fences this season.

Bet of the meeting? I would love Faugheen to win the Stayers Hurdle. Some horses stand out for me. Arkle started my love of racing. And over hurdles there’s been Istabraq, Golden Cygnet and Faugheen. He’s always been a favourite.

Lay of the meeting? I don’t think Buveur D’Air has any chance at all.

Top jockey? If I think Gordon Elliott will be leading trainer again – and I do – then Davy Russell must have a great chance again.

Most looking forward to? I look forward to all of it, the same way I count the sleeps down to the Olympics. It’s a special event with so much drama.

What wins the Champion Hurdle? I’m a big fan of Laurina. She’s not been at the top, top table yet, but I think she has the potential to sit at it and win. It looks like there will be plenty of give in the ground conditions on the first day which will help. I think she could be special.

What wins the Gold Cup? I can’t get away from last year’s winner Native River. He’s had a couple of races this season on tracks that didn’t suit. On soft ground at Cheltenham I think he’ll be hard to beat. I’m a little bit concerned that Presenting Percy hasn’t had a run over fences this season.

Bet of the meeting? Benie Des Dieux to win the Mares Hurdle again. With Apple’s Jade and Laurina not in it she’ll be hard to beat.

Lay of the meeting? Buveuer D’Air has to be taken on in the Champion Hurdle. He’s won it twice but up against two exceptional mares getting 7lbs is the biggest test he’s faced.

Most looking forward to? This is a Champion Hurdle we could be talking about for a long time to come. And hopefully Ireland will beat England again through the week.

What wins the Champion Hurdle? I fancy Laurina. Every time I’ve seen I’ve been impressed.

What wins the Gold Cup? It’s going to be Willie Mullins’s year – finally! He’s got some excellent horses for it and whatever Ruby picks I’d be happy to go with him. Kemboy and Bellshill look the pick of them.

Bet of the meeting? Benie Des Dieux in the Mares Hurdle is the nap.

Lay of the meeting? I don’t really have a strong opinion on a horse to oppose. But I do think Paul Nicholls could be leading trainer rather than any of the Irish lads.

Top jockey? Davy Russell looks to have a strong book or rides again so I’ll go with him.

Most looking forward to? The first day is probably the best card. But I love the Gold Cup and this year’s race looks better quality to last year.

What wins the Gold Cup? I’ve been looking at Bellshill for months and he’s a big fancy of mine.

Bet of the meeting? I generally have a E100 bet at the meeting and Delta Work (RSA Chase) will be the one this time. He’s been good to me already this season.

Lay of the meeting? I don’t fancy the favourite Paisley Park.

Top jockey? Barry Geraghty looks to have a good collection of rides this time, including Buveur D’Air.

Most looking forward to? I would love to see a small, rural trainer like Pat Kelly win the Gold Cup with Presenting Percy. That would be a wonderful achievement. And I’d love to see Gavin Cromwell lead in a winner too.