Some on-track bookmakers unlikely to return to racecourses post-pandemic 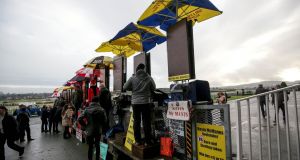 The body representing on-course bookmakers has said it is inevitable some of its members won’t return to the ring once the worst of the coronavirus pandemic is over.

The chairman of the Irish National Bookmakers Association (INBA) described the situation for on-course layers as “very precarious” and is looking for contracts with Horse Racing Ireland (HRI) and other bodies to be reviewed.

Ray Mulvaney, one of the best known racecourse bookmakers, said on Friday: “I’m hoping we won’t have casualties but the reality is we will.

“When you take that they won’t have worked for a year, possibly 18 months, then it’s difficult for anyone in any business.”

Already under pressure from online competition, racecourse bookmakers haven’t been able to operate since the first Covid-19 lockdown last March.

Betting rings at Ireland’s 26 racecourses have been empty since racing resumed behind closed doors on June 8th.

The impact of that was stamped all over HRI’s statistical report for 2020 which was released on Friday.

Not surprisingly total attendance for 2020 was down 91.1 per cent while on-course betting collapsed by 89.1 per cent.

HRI said statistical comparison with other years was mostly “futile” in the circumstances although it did point to a slight increase in total ownership of horses as evidence of the sport’s resilience.

“The figures for the numbers of horses in-training (9,248 - up 3.3 per cent on 2019) continued to grow year on year and this says so much about those involved in racehorse ownership.

“It is a testament to their resilience in the face of very challenging circumstances that they continue to stand by the industry.

“We look forward to a time when we can safely welcome owners – and obviously racegoers – back to our tracks,” HRI’s chief executive, Brian Kavanagh, commented.

He also acknowledged the “hardship” endured by businesses that depend on racecourses and racegoers, including on-course bookmakers.

Ray Mulvaney said he expects to meet with the HRI boss in the coming weeks to discuss commercial arrangements for when the government deem it safe for racing to emerge from behind closed doors. When that will be however is up in the air.

“It looks Cheltenham is going to come and go. Will we back in any format for the Spring festivals (Fairyhouse and Punchestown) – I’m not too sure. It’s not looking great for anybody at the moment.

“We will have to touch base with all the agencies, like SIS, AIR (Association of Irish Racecourses,) HRI and service providers.

“Contracts will have to renegotiated , like all contracts throughout the industry, whether it be jockeys, caterers, trainers, and bookmakers are no different,” he said.

“If they (HRI) are serious about bookmakers, and getting people back to the track, packages must be reviewed,” Mulvaney also said.

“2020 was a year when bloodstock sales companies showed remarkable flexibility on a number of fronts. There were changes to sales’ dates and locations and there was extensive use of online sales.

“While this facilitated some trade, inevitably the end of year figures were well down on what might have been expected and this is a priority area for 2021,” Brian Kavanagh said.

Off course betting receipts of €86.7 million were down 8.7 per cent although as duty is collected quarterly in arrears the figure doesn’t reflect the calendar year.

While the total number of entries and runners on the flat was slightly up in 2020 there was a noticeable dip in equivalent National Hunt figures last year.