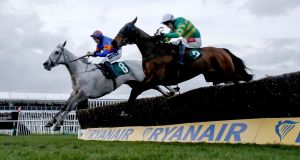 He’s faced with the massed ranks of Irish racing’s mightiest teams but Snugsborough Benny may strike a rare blow for the little guy in Easter Monday’s Boylesports Irish Grand National at Fairyhouse.

Co Laois-based trainer Liam Cusack and Offaly owner Ray Loughnane are far from household names and numerically they might feel hopelessly surrounded before the 5.00 start to Ireland’s most valuable National Hunt race.

Michael O’Leary’s Gigginstown Stud team have a 12-strong team of runners, including the topweight Tout Est Permis, as they try to win the historic race for a fourth time in five years.

Nine of the Ryanair boss’s hopefuls are trained by Gordon Elliott, including last year’s winner, General Principle. Elliott in turn has a dozen hopes of his own in all too just over three weeks after Tiger Roll’s National heroics at Aintree.

Elliott’s great rival Willie Mullins has never won the Irish National. But having finally filled one omission on his stellar CV with last month’s Cheltenham Gold Cup victory he is attacking another glaring gap with seven runners.

They include Ruby Walsh’s mount Burrows Saint who has been well backed in recent days while Paul Townend is on board Pairofbrowneyes who skipped Aintree to wait for this.

Mullins is just 13-8 with one firm to finally emulate his father Paddy who won the race four times.

In comparison JP McManus has a mere five runners as he attempts to win the National for a fourth time. They do however include the long-time ante-post favourite Any Second Now.

He will try to give his trainer Ted Walsh another win in the race, 19 years after Commanche Court’s success.

“He went up 7lb for winning in Cheltenham,” Walsh has reported. “I couldn’t tell you if he’s that much improvement in him or not. The extra three furlongs might help him find it but we’ll see.”

Only Our Duke (2017) has managed to win the National carrying 11st or more since then and Any Second Now is one of ten horses trying to break that statistical trend.

Having finished runner-up at Aintree with Magic Of Light, Jessica Harrington tries to go one better at Fairyhouse with Whisperinthebreeze.

However the concentration of resources among a few powerhouse outfits is reflected in how even Harrington is numerically outgunned.

Besides Whisperinthebreeze and last year’s third, Forever Gold, the only other one of the 30 runners not connected to either ownership behemoths, or the two top trainers, is Snugsborough Benny.

He is trained near Mountrath by Cusack who in his riding days tasted big race glory on Chirkpar in the 1992 Irish Champion Hurdle.

Unlike Mullins who is closing in on 200 winners for this season, Cusack has had half a dozen. That however is from a comparatively tiny string that many within racing believe are campaigned with notable skill.

‘Benny’ won at Fairyhouse in February, is proven on quick summer going and with 10.9 on his back looks on the rights side of the weights.

He will however need better luck than his stable companion, Snugsborough Hall, who looked to be going like a winner on Sunday until carried out by the wayward Mind’s Eye before the second last fence in a handicap.

The condition of the ground could prove a crucial factor with watering set to continue, possibly including on the morning of the big race. Course manager Peter Roe said officials are conscious of the National’s 5.00 ‘off’ time and any potential impact of warm, dry weather during the day.

Quick going shouldn’t be an issue for any of Willie Mullins’s main hopes, including both Pairofbrowneyes and Burrows Saint. The good record of novices in the National could see widespread support for Burrows Saint in particular.

The ground may be more of an issue for one Mullins’s outsiders Bellow Mome although long odds could make that a chance worth taking for each way punters.

Bellow Mome had some high class form as a novice and after almost two years off returned to action with a couple of recent runs. The second of them, behind two stable companions at Naas, was encouraging and off 10st Bellow Mome could go well.

Ground conditions can help Gardens Of Babylon reverse Triumph Hurdle form in the Grade Two Juvenile event on Monday while the Grade Two Devenish Chase might be a good opportunity for The Storyteller to defy his top-flight penalty.

The Elliott team run two hugely promising types – who between them cost almost €600,000 – in the finale.

Elliott has described Andy Dufresne as being as nice as any bumper horse he has run this season. Since that includes the Cheltenham hero Envoi Allen, that’s a level the others, even The Very Man, may find tough to match.