Fairyhouse set for extensive watering ahead of Easter festival 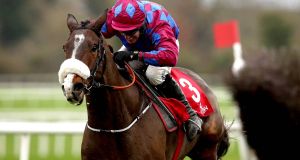 Gordon Elliott’s Jury Duty (above), along with the Willie Mullins-trained Burrows Saint, and Any Second Now is favoured by the Irish Grand National big-race sponsors. Photograph: Inpho

Ireland’s most valuable jumps race is the centrepiece of the historic three-day Easter festival which begins on Sunday.

A final declared field of 30 runners on Friday saw Gordon Elliott and Ryanair boss Michael O’Leary – who combined to win last year with General Principle – represented by a dozen runners each.

JP McManus has five of the 30 declared but also owns the three reserves. They could yet secure a spot in the race up to 10am on Sunday should there be any non-runners.

Ground conditions may yet play a critical role in what is likely to line up in the big race which is due off at 5pm on Monday.

The going at Fairyhouse on Friday was officially “good to yielding, yielding in places”. With warm weather forecast over the Easter weekend all efforts are being made to maintain such conditions by  track authorities.

They are taking place on the back of criticism directed at Ayr last week when the Scottish National saw five late non-runners due to the going getting faster over the course of race-day. “My aim is to produce good to yielding ground over the three days of the festival. We’re watering strong at the moment, putting out 15mls today, and we will continue to water to ensure we’ve nice jumping ground,” Fairyhouse’s manager Peter Roe said on Friday.

“I’m probably one of the few people who’d like the sun to go away for a few days. But we’re not in a bad position. We’re now supposed to stay dry until Monday night which makes it easier in terms of knowing what we have to deal with,” he added.

With almost two thirds of the field divided between Elliott and Mullins, not to mention the power of the O’Leary and McManus teams, the rest of the National field know they have plenty to deal with.

Initial reaction by the big-race sponsors on Friday was to go 8-1 co-favourites about Elliott’s Jury Duty, the Mullins-trained Burrows Saint, and Any Second Now who will try to give Ted Walsh a second Irish National 19 years after scoring with Commanche Court.

That horse was ridden by Ruby Walsh who also won five years later on Numbersixvalverde. Walsh has opted for the novice Burrows Saint among Mullins’s seven contenders.

Mullins came agonisingly close to breaking his National duck a year ago when Isleofhopendreams was just touched off by a head by General Principle on very testing ground. On that occasion the jockeys of the first two, JJ Slevin and Danny Mullins, received seven- and three-day bans respectively for their use of the whip. Recent changes to the whip rules mean a stewards enquiry is automatically triggered if a rider strikes a horse nine times or more.

The Easter festival will be the first time the new regulations will apply in a major Grade One arena but the Irish Horseracing Regulatory Board is optimistic serious breaches will not occur. “There will be briefings at Fairyhouse before each day and the fact that races are high profile will be stressed,” the IHRB chief executive Denis Egan said on Friday.

“Stewards secretaries have been briefing jockeys before racing every day and there have been a number of remarks passed by our own team as to how much better racing is looking because of changes to the whip rule. There was comment about the  Grand National passed in Aintree and how it panned out very well with the whip restrictions over there. I see no reason why it should be any different here,” he added.

There are just two cross-channel runners for the Irish National which has been won twice in the last decade by raiders.