Watering likely to be required at Fairyhouse ahead of Easter festival 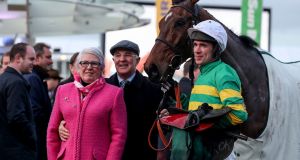 Fairyhouse officials expect they will have to regularly water the track this week ahead of the prestigious Easter festival.

After torrential rain affected some parts of the country the prospect of warm weather conditions later in the week means a delicate balancing act lies in store for authorities at the Co Meath track.

There was criticism about the ground being too fast for Saturday’s Scottish Grand National at Ayr with five late non-runners due to the state of the going.

“That would be ideal. That’s why we’ll keep watering . If I had the ground like it is now I’d be happy.

“Everyone’s looking at what happened in Ayr on Saturday. We all set out to produce lovely jumping ground, everyone does, particularly at this time of year. But sometimes it’s like pushing water up a hill,” said Peter Roe on Monday.

Up to 20mls of water already put on the track last week is helping Fairyhouse’s task although the watering conundrum is not something Roe relishes.

“I hate watering with a vengeance. Last year we lost the Tuesday [of the Easter festival] because of watering. It has to be done. It’s a modern thing with people’s expectations of what good ground is. And my gut feeling is we’ll be watering more to achieve it,” he added.

The vagaries of the Irish weather were highlighted once again on Monday with Tramore abandoned following heavy rain. Fairyhouse anticipate further rainfall into Tuesday but there is a dry forecast after that.

The Ted Walsh-trained Cheltenham festival winner Any Second Now is a general 8-1 ante-post favourite to give owner JP McManus a fourth success in the Easter Monday highlight.

The Easter festival begins on Sunday with the featured Grade One Ryanair Gold Cup Novice Chase for which the next entry state will take place on Tuesday.

How the National is likely to shape up will become more clear after its next entry stage on Wednesday with final declarations on Friday.

In flat racing news, Aidan O’Brien could get a classic ‘sighter’ at Newmarket’s first fixture of 2019 on Tuesday when Western Australia lines up for the Listed Fielden Stakes.

The subsequent Derby and Arc hero Golden Horn won the race in 2015 and Western Australia, runner-up in Dundalk’s Patton Stakes last month, will have half a dozen opponents in the nine furlong heat.

“I’ve said plenty about him in the last year – probably too much – but I think he’s a lovely horse,” Burke reported.

“I hope I’m wrong but he is just showing that a mile in the top grade might just catch him out for a turn of foot which is why I’m happy to run him over an extra furlong.

“For me he’s a mile and a quarter horse plus. If he wins then we’ve the option of coming back for the Guineas because he’ll have had a look at the track as well,” added the Yorkshire-based trainer.