Osborne still optimistic about the future of beleaguered €81m facility 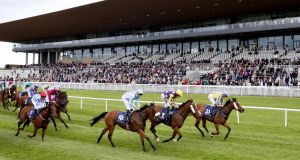 Sheikh Mohammed’s representative on the Curragh board has said the vision for Irish racing’s revamped HQ to be a world class facility has been consistent through its development although he acknowledged kinks remain to be worked out at the beleaguered track.

Joe Osborne represents the Sheikh’s Godolphin team which put in €5 million to the Curragh’s redevelopment. They were one of the original investors in the project along with Coolmore, JP McManus, Moyglare Stud and the Aga Khan.

Irish racing’s biggest ever capital development at just over €81 million – including €36 million of public funding – has been dogged by problems even before it opened its gates in May.

In particular it received heavy criticism after the recent Irish Derby festival in relation to long queues for food, drink and toilet facilities.

In the wake of that, Horse Racing Ireland chief executive Brian Kavanagh voiced concerns about the race-day experience for some people as well as a low attendance figure for the Group One Pretty Polly Stakes the day before the Derby.

The latest blow came at the weekend when the Curragh’s chief executive Derek McGrath announced he is stepping down in October. He subsequently suggested to The Irish Times that a lack of unity exists within racing about the best long-term future for the new facility.

Pointing to “a very complex stakeholder and shareholder mix,” McGrath said there was failure to “integrate behind a shared vision for what we want the Curragh to be”.

As well as the State, through HRI, and the Irish Horseracing Regulatory Board, some of the most influential private figures within racing are represented on the Curragh board which is due to meet on Tuesday.

Talk of division is embarrassing for the sector considering the high-profile nature of the new development which has so far failed to attract anticipated attendances at a facility designed for up to 30,000 people. Slightly less than 12,000 was the official Derby day crowd.

The Curragh’s latest classic date is this Saturday’s €400,000 Kerrygold Irish Oaks. However the first significant Curragh date this week could be Tuesday’s board meeting where McGrath’s comments are likely to figure prominently.

“I’m sorry to see him go. I think he achieved a lot in a short space of time. It was a complex set of duties he was given,” Joe Osborne said on Monday.

“At the same time any of the complaints that have been voiced [about the track] are all fixable ones. I think the team there has to be given some credit for what happened between opening day to the Guineas.

“I know there were some challenges on Derby day which were unfortunate. But I did feel there was a sense that from meeting to meeting things were getting better and better.

“The vision of it being a world class racing facility has been consistent right the way through. But in the delivery of that there have been some challenges.

“I still remain very optimistic the future is bright for the Curragh. The facility is there. It’s just a matter of getting the kinks worked out,” he added.

On the racing front, Tuesday will also see an important stage for the Oaks which locally trained horses have only won twice in the last decade.

That pair of Bracelet (2014) and Seventh Heaven (2016) are among Aidan O’Brien’s five Irish Oaks winners to date. One more will see him equal Sir Michael Stoute’s race record.

Watering began at the Curragh on Monday on ground that was officially described as firm, and good to firm in places, on the round course.

The Killarney festival continues on Tuesday with another mixed card that begins with a mile conditions race for three year olds that could see John Oxx’s Manjeer defy official ratings.

His 93 mark is 6lbs inferior to Ballydoyle’s hope, Dunkirk Harbour, but quick going could play to his strengths.