‘If we failed . . . it was to integrate behind a shared vision for what we want the Curragh to be’ 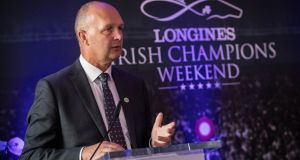 Derek McGrath: ‘I knew what I was getting into.’ File photograph: Ryan Byrne/Inpho

The departing Curragh boss has suggested a lack of unity exists within racing’s top echelons about the best long-term future for Ireland’s most famous racecourse.

An already tumultuous first season at the new €81 million Curragh took another twist at the weekend with confirmation that the track’s chief executive will step down later this year.

Derek McGrath, a former long-time chief executive of the European Rugby Cup, and an ex-Irish rugby international, has been at the Curragh helm for three years overseeing the largest capital development project in Irish racing history.

The project, which included €36 million of State money, as well as investment from top industry stakeholders such as JP McManus and Dubai ruler Sheikh Mohammed, has been plagued by controversy even during construction.

However, teething problems since racing began again at the new facility in May appeared to come to a head at the recent Irish Derby festival.

The new Curragh is designed to cater for up to 30,000 people. But there was heavy criticism of lengthy queues for food and drink as well as toilet facilities despite an official Derby day attendance of 11,957.

Significantly Kavanagh also said the experiment of running the Group One Pretty Polly Stakes on the Friday of the Derby festival didn’t work, pointing to a disappointing 3,661 crowd figure and indicating different options for the fixture would be explored for 2020.

Kavanagh is on the Curragh board along with representatives from the racing and bloodstock industry’s biggest names such as Coolmore, Godolphin, the Aga Khan and Moyglare Stud. It is chaired by former ESB boss Pádraig McManus.

Any impression that left about divisions at the top level of the sport won’t have been allayed by McGrath’s decision to step down. On Sunday he said he will leave after the track’s final date of 2019 which is on October 13th.

“My job is to make a decision, which I made, and I’m happy that I took a view of where things were. I felt that having completed the project that was a good time to look for a different future somewhere else,” said McGrath.

“I knew what I was getting into in the sense that there was a very complex stakeholder and shareholder mix. That’s something I’ve encountered in previous jobs so that wasn’t a surprise. But perhaps if we failed to do anything it was to integrate behind a shared vision for what we want the Curragh to be,” he added.

The Curragh position was the former rugby boss’ first job in racing. He said his experience suggested to him a need for greater integration within the industry.

“There were aspects which maybe reflect as a challenge for the sport. Perhaps there is a need to integrate interest rather than be looking at how interests are conflicting in order to find a way that the sport can compete with other forms of entertainment and other sports,” he said.

Brian Kavanagh declined to comment when asked if he’d undermined McGrath’s position with his post-Derby festival comments. However he did say: “I wish Derek well and thank him for the work that he’s done.”

It is the latest high-profile development in Irish racing’s most expensive project which ran €16 million over what was originally budgeted.

There was controversy even during construction with restricted on-site attendances heavily criticised, particularly in relation to the Curragh’s biggest dates, the Irish Derby and Irish Champions Weekend.

The new parade ring had to be rebuilt because it was too small and plans to open the new facility in April of this year were delayed. Instead the first meeting in front of the spectacular new Aga Khan stand took place in May.

Issues quickly emerged such as the stand making a whistling noise when the wind blows in a particular direction. Facilities for owners and trainers have also come under scrutiny as has the cost of ticketing.

After the Guineas festival at the end of May the decision was also taken not to release crowd figures for each of the days involved. But that was reversed for the Derby festival.

“It’s been a great experience. It’s a really complex project but I’m really pleased with what has been produced,” said McGrath.

The next meeting of the Curragh board takes place on Tuesday ahead HQ’s latest classic programme which will be the €400,000 Kerrygold Irish Oaks on Saturday.

In other news Killarney’s five-day July festival kicks off on Monday with a mixed card. Robin de Carlow can emerge best in the concluding novice chase.

On Wednesday the festival will have Frankie Dettori riding at the picturesque venue. The Italian is expected to have a handful of rides, possibly including in the Listed Cairn Rouge Stakes.

1 Ferrari’s Charles Leclerc ‘will not take the knee’ before Austria GP
2 John Egan rescues a point for Sheffield United at Burnley
3 Monica Seles: The warrior queen who could have been the best ever
4 Matt Williams: Six Nations must recognise the desire for revolution outside Europe
5 Séamus Power huffs and puffs as Wolff blows the door down in Detroit
Real news has value SUBSCRIBE