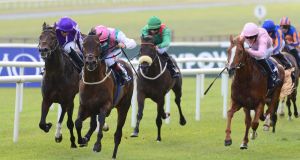 RTÉ has expressed satisfaction with increased audience figures for its coverage of the Curragh Guineas meetings on Friday and Saturday.

The much anticipated return of live sport on RTÉ for Friday’s Tattersalls Irish 2,000 Guineas saw audience levels almost double as the opening classic of the year won by Siskin was watched by 129,000 viewers on RTÉ2. That compared to a peak of 69,000 for the race in 2019.

The average audience across Friday’s two-hour programme on RTÉ was 83,000, nearly double that of last year.

The biggest figure of all came for Saturday’s 1,000 Guineas victory by Peaceful with 150,000 watching the big race.

The average audience across Saturday’s two-hour programme was 97,000 compared to an average over the previous five years of 74,000.

They are encouraging results for racing and described as “very pleasing “ on Monday by RTÉ’s head of sport, Declan McBennett.

“Strict audience numbers were never the one parameter for us. It was about getting live sport back. But the numbers are extremely good and very encouraging with regard to future racing and the desire of the public for live sport, including racing,” he said.

Coverage of both Guineas races at the Curragh was also available ITV4 and on the subscription channel, Racing TV.

With racing the first major sport to resume live competitive action following the shutdown due to the coronavirus pandmeic, RTÉ has committed to increased coverage of the sport, including new one-hour programmes every Friday, Saturday and Sunday evening until mid-July.

The first of those takes place this Friday and will include live action from Gowran Park.

The increased coverage has been described as a “short term commitment” by RTÉ as it tries to fill schedules starved of other major live sporting events.

“It is a short-term commitment for now until we see the broader picture. In truth we don’t know how finances or live sport or the industry as a whole will come out of this.

“But it’s a commitment we’ve put in place in order to allow Horse Racing Ireland catch up. We will reassess it at the end of the period.

“This Guineas is something we do every year. We need to judge the new output by the time that five week period is over. But we’re certainly happy with the weekend just gone and the numbers would reflect that,” McBennett said.