Racetrack organisation does not envisage any closures in the short-term 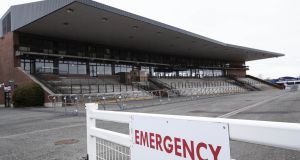 Fairyhouse’s Easter meeting has been cancelled but the Boylesports Irish Grand National will be held at some stage when racing resumes. Photograph: Morgan Treacy/Inpho

The organisation that represents Ireland’s 26 racetracks has said it doesn’t envisage any of them closing in the short-term due to the Covid-19 pandemic but warned it could be a different story if racing doesn’t resume beyond that.

Horse Racing Ireland (HRI) has already said it is very worried about the viability of some tracks if there is a sustained shutdown of the sport due to the coronavirus.

With racing shut down since last week, and the rest of the National Hunt season already cancelled, few believe the prospects of a resumption by the time of the Government’s April 19th deadline on social gatherings are good.

HRI has pledged to be “racing ready” when given a green light by Government to start again with a staggered return of four weeks of Flat racing, most likely staged behind closed doors. Like other sectors of the sport the Association of Irish Racecourses (AIR) is waiting anxiously on a return date.

In response to fears about potential closures the longer the Covid-19 emergency goes on, AIR’s chief executive, Paddy Walsh, said on Friday that provision for such resumption date is vital for the fortunes of all tracks.

“If it’s a couple of months I can’t see any racecourses that are close to going under. I don’t see that happening. But if it was to go on for, God forbid, six or seven months then that’s a different kettle of fish altogether,” Walsh said.

“Everybody is closed down. The main affect, apart from the health side obviously, is that their income sources have dried up in terms of franchises, or payment from bookmakers, media rights obviously, and all the rest.

“The vast bulk are signed up for the Covid subsidy scheme so they’re trying to keep the staff on board so we’re all ready to go when things get back to some kind of normality.

“[But] literally 100 per cent of their income has stopped. It’s as simple as that in revenue terms. The Covid scheme is a big help with the wage and salary bill. But everybody has insurance and all the normal bills everybody has.

“Even non-racing income from shows or other events they might run, that’s all stopped. We haven’t put a figure on it [overall cost]. Until we get a realistic resumption date, if we had that, and we’d like to think we might get that a month in advance, at that stage damage assessment would start,” he added.

Fairyhouse and Punchestown are the two tracks that have been most severely affected with the loss of their biggest earning dates of the year this month.

Both of their major festival’s dates won’t be rescheduled although the €500,000 Boylesports Irish Grand National is set to be re-fixed during an enhanced autumn programme.

The impact of Covid-19 on any re-jigged fixture programme for 2020 is likely to be determined by how long racing is cancelled, something to the forefront of AIR’s planning for the weeks ahead.

“Generally speaking everybody could take a hit for two months on the basis that everybody will be making every effort, when we do get back, to replace some of the meetings that have been lost,” said Walsh.

“There’s no way you’re going to get them all back in, with the best will in the world, and you might not want to do that anyway having regard to all the circumstances.

“If we ended up losing 10 per cent of the fixtures for the year, or maybe a bit more, everybody can live with that. It will be painful but it won’t be catastrophic.

“But if we get a second wave of it, of something ridiculous, and this is pure speculation, we might have to look at things again.

“But for the moment everybody is bunkered down and hoping for some good news sooner rather than later.

“The likes of Fairyhouse and Punchestown are taking a huge hit with losing their biggest festivals. That’s a serious financial blow.

“But your average racecourse, let’s say we’re gone for a couple of months, they’ll lose a couple of meetings.”

With HRI committed to staging a month of Flat racing alone when racing does resume the outlook for the National Hunt sector looks murky. That includes for tracks such as Kilbeggan and Downpatrick that race only over jumps.

“All these things will have to be factored in when redrafting the fixture list because that is essentially what will happen when we get back, whenever that is. We’ll be looking at a very different fixture list I would imagine.

“Some racecourses will be affected more than others. I’d like to think in their deliberations, HRI would take that into account so that the pain gets spread as evenly and equitably as possible with all racecourses,” Walsh commented.