Punchestown unlikely to move to a Sunday finish anytime soon

Organisers will look at ‘pros and minuses’ of moving dates as record 35,958 attend final day 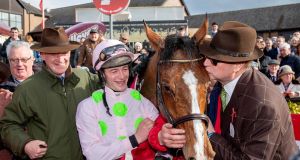 Punchestown authorities have said changes to its festival dates are unlikely in the short term but conceded the “pros and minuses” to moving the National Hunt festival forward so it can finish on a Sunday will be reviewed.

On Saturday an incident-packed and record-breaking festival brought the jumps season to a close with a modern-day attendance record of 35,948. It brought the total attendance for the five days to 127,489 – up 4,932 on 2017.

The retirement of the former amateur champion jockey Nina Carberry on Saturday, when winning on her final ride, replicated her sister-in-law Katie Walsh who did the same thing the day before.

With Willie Mullins retaining the trainers’ crown, and coming within less than €32,000 of the €6 million prizemoney mark after a record 17 festival winners yielded just over €1.7 million during the five days, the festival was widely regarded as being hugely successful.

Even before it was over, though, Irish racing was left with the prospect of a rare Sunday blank after Gowran’s flat fixture was cancelled due to waterlogging.

So, with Punchestown’s Ladies’ Day programme attracting over 33,000 on Friday – a major leap up from attendances of around the 20,000 mark on the first three days – the prospect of starting the festival on Wednesday and ending on Sunday is set to be examined again.

The track’s racing manager Richie Galway ruled out any chance of extending the festival to six days. However, although he said moving jump racing’s showpiece event to include the entire weekend is unlikely in the short term, he stressed the prospect is going to be reviewed.

“It’s something we will look at. I think it’s probably unlikely in the immediate short term. But it’s under continuous review because there are definitely pros and minuses to it,” Galway said on Sunday.

“Having reviewed it previously, we’re satisfied the current mix works well across the five days. The corporate market and entertainment for businesses appears to work better on weekdays rather than weekends. But it’s something we will look at again,” he added.

“Tuesday to Thursday tends to be for seasoned racegoers. Obviously crowds of around 20,000 are not to be sniffed at, and Friday and Saturday are obviously excellent in terms of attendances.

“If you’re a real racing enthusiast that’s your objective for going racing. It’s like Royal Ascot. Those programmes are strongest too in the early days of the week,” Galway said.

“From a social point of view, while racing is the main hook, it’s only part of the hook that brings people racing.

“Whether we like it or not, the festival is two or three things. In front of the stands there’s top-class racing. Behind the stands, towards the weekend, it’s starting to morph into a rock concert, a social event and a hospitality event.

I thought 2017 would be a hard act to follow but I think it did. So many stories came up

“We’ve run concerts for a number of years in Punchestown, and the Friday in particular has that vibe about it. A lot of people who are using public transport or using park-and-ride, they make the reserved enclosure a real hub of entertainment that lasts after racing is finished,” he added.

The battle for the trainers’ championship, which eventually saw Mullins beat Gordon Elliott by €809,524 in an astonishing swing of over €1.3 million during the week, was expected to dominate the festival.

However, the retirements of Walsh and Carberry, as well as the dramatic day one incident which saw former champion jockey Paul Townend get a 21-day ban for dangerous riding, also attracted huge attention.

“I thought 2017 would be a hard act to follow but I think it did. So many stories came up. If you were writing a script it would seem too far-fetched to believe,” Galway said.

Davy Russell was crowned champion jockey for the third time in his career on Saturday after winning 119 races in Ireland worth over €2.6 million in prizemoney. The 38-year-old was previously champion through 2011-2013.

“I thought the day was gone when I could ride well over 100 winners in a season. It’s thanks to Gordon [Elliott] and all his team and the support I’m after getting from a lot of people including Gigginstown, ” he said.

“The Grand National [Tiger Roll] is very special as I never thought I’d win one. That’s a career highlight and a dream come true. Presenting Percy was another very good horse for me this season. It’s been a great year. It starts again on Monday and we have to go and do it all over again!” Russell added.

Russell has three rides for Elliott at the first fixture of the 2018-19 jumps season at Kilbeggan on Monday. Crezic has proved frustrating but a 117 rating for a maiden hurdle at this time of year is hard to argue with. Eshtiaal is Russell’s mount in the Beginners’ Chase but it is Gangster’s 143 mark that looks the most convincing credential.

Rachael Blackmore enjoyed three winners at Punchestown and she’s aboard Gangster who had four novice runs last season. He returned from a year off with a spin over hurdles last month and can go in.