Amateur star bows out after victory aboard Josies Orders at Punchestown 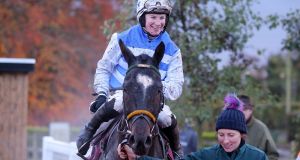 Nina Carberry has announced her retirement after a win at Punchestown on Saturday. Photograph: Jonathan Porter/Inpho/Presseye

Nina Carberry announced her retirement from the saddle after riding Josies Orders to victory at Punchestown on Saturday.

The news comes just a day after weighing-room rival and sister-in-law Katie Walsh revealed she too was bowing out.

Josies Orders, trained by Enda Bolger and sent off the 6-5 favourite, was narrowly beaten in the La Touche Cup just two days ago but had no trouble winning the Dooley Insurances Cross Country Chase.

Carberry has been one of the top riders in the amateur ranks for well over a decade, partnering her first Cheltenham Festival winner when Dabiroun took the Fred Winter Juvenile Handicap Hurdle back in 2005.

The 33-year-old went on to ride a further six Festival winners and also claimed the Irish Grand National aboard Organisedconfusion in 2011.

Carberry said: “I think either way I would have stopped today. Today was the day and it was just nice to have Josies to bring me home in front.

“He [Bolger] has been a massive supporter of mine and obviously I wouldn’t have had all the Cheltenham winners without him or JP [McManus] so I’m very grateful.

“Obviously Noel Meade is a massive supporter and was very loyal to me the whole time and Gordon Elliott, too. I couldn’t have been here without all them. Gigginstown gave me plenty of winners as well.

“I’m sad and I’m happy! I’m sad that it is all finished and I’ll miss the banter in the room, but happy there is a new career in front of me.”

Asked about the future, she said: “I’ll continue riding out at Ballyodyle and hopefully buy and sell a few.”

Carberry now hopes to see plenty of woman continuing to make their marks in the riding sphere.

She said: “Mine has been a career that I’d never swap for anything and to work at something that you enjoy, not many people can say that and I’m going to miss it to bits but its on to the next chapter now.

“I just want to say I think it’s great to see the likes of Rachael [Blackmore], Katie O’Farrell and Lisa O’Neill and all the girls in England that are doing very well and hopefully a few more girls will join in.

“It’s not that I have anything against the boys or anything but the girls are well able to put it up to the lads! My daughter Rosie was here today and she’s full of flight and its wonderful to have her”

Bolger admitted he was speechless after seeing Carberry bow out on a high.

He said: “I am stuck for words. I am so happy for her. You always got 110 per cent from her. I left it all to her. She’s a Carberry and they are natural horse people.”

Carberry has had a long association with trainer Meade, riding for him as an amateur before eventually becoming his racing assistant in 2013.

He said: “She is such a fabulous person. What you see with Nina is what you get. She is a fabulous judge and tactician and a really accomplished rider.

“She was a pleasure to work with and have anything to do with. There were absolutely no sides to her.

“She told me during the week [that she was going to retire]. I was a bit shocked. I thought she might stop riding over jumps and stay on in bumpers but I’m thrilled for her that she got out in one piece.”

Patrick Mullins, another leading light in the amateur field, paid tribute to Carberry’s skill in the saddle.

He said: “It’s fantastic to see Nina go out with a winner on the biggest stage, just like Katie did.

“The greatest compliment I can give her is when I beat her a short head it was the greatest feeling, but also when she beat me it was the worst feeling.

“She was a Carberry, I couldn’t understand, riding so short, how she could get them to settle. She had that Carberry-class, she was so patient.”