On The Fringe enjoying Foxhunters preparation 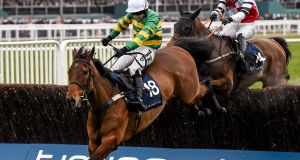 On The Fringe, with Nina Carberry on board, on their way to winning the St James’s Place Foxhunter Steeple Chase Challenge Cup at Cheltenham last year. Photograph: Getty Images.

On The Fringe may now be at the veteran stage but hunter-chasing’s superstar performer seems as good as ever to trainer Enda Bolger and he will start one of the Cheltenham festival’s warmest favourites next week.

The 12-year-old is a general 6 to 4 favourite to land the Foxhunters for a third year running and keep a possible hunter chase Triple Crown hat-trick within his sights. On The Fringe has won at Cheltenham, Aintree and Punchestown for the past two years.

His usual jockey Nina Carberry is pregnant so the season’s top amateur Jamie Codd will again take the reins having ridden On The Fringe to finish runner-up to Foxrock in his festival warm-up at Leopardstown less than a month ago.

Codd was also on board when On The Fringe worked after racing at the Dublin track on Sunday.

“Every day Jamie rides him he gets more familiar with the horse and he had a smile on his face pulling up after they worked at Leopardstown. The horse is as fresh as paint after that day out,” Bolger said as the countdown to Friday week’s race continues.

“He has actually had a better preparation this time. An abscess in a foot held him up for most of January last season and it was a rush to get him to Leopardstown. This time he nearly pinched the Leopardstown race, against a very good, and fitter, horse in Foxrock.

“It was very encouraging and now we’re just putting the final pieces of the jigsaw together with him,” Bolger added. “He’s in great form and certainly gives no indication he isn’t as good as ever.”

The Co Limerick-based trainer will also hope it’s a case of “Lucky 13” in the Glenfarclas Cross Country Chase. First run in 2005, Bolger eventually won the marathon event for a fifth time when Josie’s Orders got last year’s renewal after Any Currency lost the race due to a positive drugs test.

Of Bolger’s four entries, three are guaranteed to get into the final maximum field of 16, including the long-time ante-post favourite, Cantlow, who will be ridden by Mark Walsh. Adrian Heksin is set to ride the Punchestown winner Auvergnant leaving Derek O’Connor on board Colour Squadron.

“Only 16 run and there are 27 entries so we’ll know more after the forfeit stage on Thursday. I do know Cantlow, Auvergnat and Colour Squadron will get a run,” Bolger said.

“Cantlow has been around there twice and we didn’t really reckon on the French horse (Urgent De Gregaine at 50 to 1) the last day. But I hear he’s only 50-50 for the race now because we’ll all be on 11.4 next week.

“Auvergnat is only seven which is young for a cross-country horse so I don’t know if he’s man enough for it yet. But we’ll see,” he added. Bolger’s other cross country hope is Quantiaativeasing.

In other news the Grade One feature on each of the first four days of April’s Punchestown festival will be worth €250,000. The four races, including the Coral Gold Cup on day two, have been boosted by €50,00 each.

“The key Grade One races remain a priority and hence the €50,000 increase to the four feature events,” said Punchestown’s racing manager, Richie Galway.

“But we are also very conscious that all owners should benefit from enhanced prize money and similar to our improvements in recent years, we remain very much focused on addressing the values of the overall programme,” he added.

Leopardstown has also got a boost with confirmation that Japan’s new Group One race, next month’s Osaka Hai, will be a “Win & You’re In” race for September’s Irish Champion Stakes. The winner will have automatic entry into the Irish race which was the second-highest ranked event globally in 2016.