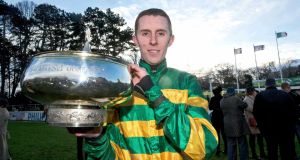 Jockey Mark Walsh has landed some top mounts for Cheltenham due to the injury suffered by Barry Geraghty. Photograph: Morgan Treacy/Inpho

Barry Geraghty’s injury misfortune has turned into Mark Walsh’s opportunity and the Co Kildare jockey can look forward to an enviable book of Cheltenham festival rides for owner JP McManus next week that include the prime Champion Hurdle fancy, Yanworth.

With Noel Fehily set to team up with McManus’s other Champion Hurdle contender, Buveur D’Air, and the hot Stayers Hurdle favourite, Unowhatimeanharry, the McManus team are backing their Irish-based understudy to step up to the festival plate despite Walsh never having won there before.

But it has been confirmed that Walsh will team up with both Yanworth and Uxizandre (likely to line up in the Ryanair Chase) for trainer Alan King and he keeps the Gold Cup ride on the Jonjo O’Neill-trained More Of That having ridden him in last month’s Irish Gold Cup.

Among other Grade One rides Walsh can look forward to is Jezki as McManus’s racing manager, Frank Berry, said: “Noel Fehily will ride Unowhatimeanharry in the Stayers and it’s more than likely Jezki will run in that race too. Mark Walsh will ride him.”

Walsh has tasted Grade One success for McManus in the past, including a memorable Irish Gold Cup victory on Carlingford Lough last year and he was supported into 12-1 in betting for the leading jockey award next week.

Aidan Coleman is another jockey who is likely to be employed by McManus next week and he is already pencilled in for the ride on the Champion Hurdle outsider, My Tent Or Yours, and Minella Rocco in the Gold Cup.

Yanworth’s trainer Alan King said: “Mark Walsh is going to come over and have a sit on Yanworth and Uxizandre, probably on Thursday, and the plan is that he’ll ride both horses at Cheltenham. I don’t know him at all, but he’s a very good rider. I’ve been very happy with both horses since their last runs.”

A home-based McManus owned star likely to be in Grade One festival action is Jer’s Girl, currently a 7-1 chance for the OLBG Mares Hurdle on the opening day of Cheltenham, who pleased her trainer Gavin Cromwell in a workout at Leopardstown on Monday.

“She worked well so we’re happy enough with where we are. We were a small bit disappointed with her last run [last of five in the Ryanair Hurdle]. She was a bit flat on the day. She had a few weeks off after that very well in herself now,” Cromwell reported.

Cheltenham officials are forecasting “good to soft” going for the start of the festival on Tuesday although the weather outlook for the week ahead is mixed.

“The forecast remains unsettled, with bits and pieces of rain coming in during the course of the next week amounting to somewhere between nine and 11 millimetres,” said clerk of the course, Simon Claisse.

“I wouldn’t expect much change in the going between now and the start of the festival. For festival week we’re looking at temperatures of around 10C with little bits of rain here and there.

“I haven’t changed the ground from Sunday, so it’s good to soft on the Old Course and good to soft, good in places on the New Course and the cross-country course. We’re very happy with where we are. The course looks in fantastic shape,” he added.

1 Cheltenham faces criticism after racegoers suffer Covid-19 symptoms
2 Coronavirus crisis could cost the GAA up to €60 million
3 Ian O’Riordan: Learning to run for the first time all over again
4 Cycling Ireland thrilled with take-up for Zwift League series
5 My favourite sporting moment: Shels finally make all the heartbreak worth it
Real news has value SUBSCRIBE