Trainer saddles his final runners at the Curragh before retiring 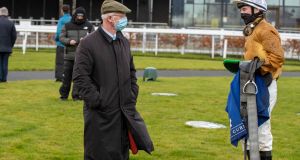 John Oxx talks to jockey Gavin Ryan at the Curragh on Monday, where he ran his final horses as a trainer. Photograph: Morgan Treacy/Inpho

John Oxx brought the curtain down on his stellar career at the Curragh on Monday, although there was no fairytale ending.

The Curragh -based trainer, renowned for his handling of Sea The Stars, saddled his final runners at his local track after announcing his retirement last month.

Earlswood did best of an Oxx trio of runners in a juvenile maiden when finishing third to the Aidan O’Brien-trained Arturo Toscanini.

Oxx did saddle a two-year-old winner at Naas on Sunday when Storm Legend was successful.

“It’s a big day. It has been coming for a while. You have to stop somewhere, someday. We are happy that it is at our local track,” said the 70-year-old former champion trainer.

“We nearly went out on a winner but I’m happy with my few runners there. They all ran well and showed a bit of promise for the future.

“We’ve no complaints at how life turned out, but there comes a time to stop. We’d been thinking of it for a few years and the more we think about it, the happier we are.

“I’ll miss the people, the chat and communication, and I’ll do a few bits for people. I won’t be over-busy, but I’ll be busy enough I hope and you’ll see me at the races.”

Inevitably memories returned to Sea The Stars and his unbeaten 2009 campaign that included the 2,000 Guineas, the Derby and the Arc.

“We were blessed to have had him. I could never have any complaint in my life when I trained him. It was just the biggest privilege you could have as a trainer and the biggest dream come true that you could have.

“He was a phenomenal individual and a phenomenal physical specimen and had a tremendous mental attitude and mental strength. All the great horses, what separates them from the rest is their temperament and their mental constitution,” Oxx said.