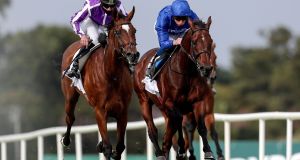 Money allocated by Horse Racing Ireland (HRI) for the installation of CCTV cameras at some racecourse stable-yards in 2018 was used instead for other integrity purposes by the Irish Horseracing Regulatory Board (IHRB).

It is understood a decision was taken by the board of the IHRB that the funding would have allowed for CCTV installation at only a small number of tracks so was better spent on different aspects of integrity.

The absence of CCTV for integrity purposes in stable-yards at every Irish racecourse bar Leopardstown has been highlighted on the back of the Viking Hoard case and how the Charles Byrnes-trained horse was ‘nobbled’ at Tramore in 2018.

Viking Hoard was doped with the sedative ACP by an unidentified third party on October 18th of that year. The horse jumped six hurdles before being pulled up by jockey Kevin Brouder and was afterwards found to be 100 times over the screening limit for the drug.

Byrnes was last week given a six-month ban for being “seriously negligent” in leaving Viking Hoard unsupervised in his stable at Tramore for a period. He has lodged an appeal against that penalty.

In the original hearing into the case Byrnes’ solicitor referred to the “absence of a CCTV camera in the Tramore stable-yard that might have identified or eliminated possible culprits.” He suggested this resulted in “gaps in the investigation.”

The IHRB has come under fire generally for an absence of CCTV at the country’s racecourses, with renewed focus on how HRI’s budget allocation of €9.1 million for integrity in 2018 included provision for “CCTV installation at a number of racecourse stable-yards.”

CCTV in stable-yards has been mandatory in Britain for years. However Leopardstown - which is owned by HRI - is still the only track in Ireland to have had cameras installed for integrity purposes.

In 2019 Tramore privately installed CCTV in its stable-yard. The Curragh, which has both HRI and the IHRB as shareholders, did the same during its reconstruction with 90 per cent of its stables covered. It aims to be fully covered when racing resumes there in March.

Asked why HRI’s 2018 budget for CCTV had been re-allocated, the IHRB spokesman, Niall Cronin, said on Tuesday: “Any re-allocation of any major funds from an approved budget is sanctioned by the board of the IHRB, subject to the approval of Horse Racing Ireland.”

Cronin wouldn’t comment on how much money had been budgeted for CCTV installation. Asked what aspects of regulation the sum had been re-allocated to, he wouldn’t expand beyond “integrity services.”

It has been estimated that the installation of CCTV at a racecourse stable-yard can cost up to €20,000.

On the back of the controversial case which saw trainer Ted Walsh cleared of any wrongdoing in relation to how his horse Foxrock lost its front shoes at Punchestown in late 2014, examination was given by racing’s authorities to a pilot scheme installing CCTV at a number of tracks.

Leopardstown was the first of them and was generally considered a success. However similar provision has yet to be made at any other course.

The decision to reallocate the HRI funding to other integrity areas was made by the IHRB board which in 2018 was chaired by the senior steward of the Irish National Hunt Steeplechase Committee (INHSC), Peter Allen.

Members of both clubs took the decision to create the new company as a more appropriate structure for regulation. The Turf Club and the INHSC continue to exist as private clubs with each nominating three directors to the IHRB board.

HRI has budgeted €14 million for integrity and racecourses services in 2021.

In other news, the Irish Champion Stakes won by Magical at Leopardstown in September has been rated the second best race run in the world in 2020.

Only the International Stakes at York, where Ghaiyyath beat Magical, Lord North and Kameko, was rated superior in the Longines World Racing Awards announced on Tuesday. The Japan Cup was the third highest race.

Godolphin’s Ghaiyyath was rated the world’s best racehorse in 2020 on a handicap mark of 130. That put him 4lbs clear of the Kentucky Derby and Breeders Cup winner, Authentic.