Men’s Hockey: UCD outclass Annadale to move back into the top three 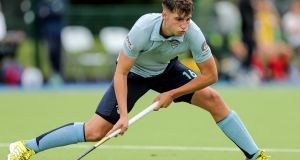 Guy Sarratt was on target for UCD in the 8-0 mauling of Annadale. Photograph: Laszlo Geczo/Inpho

UCD completed the pre-Christmas men’s EY Hockey League programme with a resounding 8-0 win over Annadale to move back into the top three.

Ali Empey set the ball rolling, scoring just a few minutes into his debut for the club having switched from Three Rock Rovers in midweek.

For the students, it keeps them right in the frame for a playoff place for the first time but, for Annadale, their tenure in the division already looks to be in real peril.

Since Callum Robson, Peter Caruth and Ryan Getty departed for pastures new in the summer, it has been a rough campaign with only an opening day point against Corinthian to show for their efforts. They are conceding an average of over six goals a game.

The competition will return on February 1st with a round of back matches postponed from November with ’Dale travelling to their nearest rivals at the bottom, Pembroke, who are four points better off. Lose that one and the writing will probably be on the wall with 10 games to go.

In Leinster Division One, meanwhile, Clontarf moved a big step toward a maiden crown at this level as they hammered nearest rivals Railway Union 5-0.

Both sides went into the contest with a perfect eight wins from eight but the tie was surprisingly one-sided as first half goals from Kevin Murray, Luke Hayden and Jordan Edmonds had the bulls in dreamland.

Australian Davyn Keuter and Kevin Mullins completed the rout for a three-point at the halfway stage in the league.

And Clontarf’s campaign can get even better should they land the Neville Cup on St Stephen’s Day when they meet reigning champions Three Rock Rovers. Success there would be a first-ever senior trophy for the club.