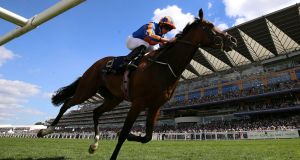 Ryan Moore on board Magic Wand. The mare continues to be a reliable fixture on the international circuit. Photograph: Nigel French/PA Wire

Aidan O’Brien begins his 2020 campaign in Florida on Saturday when the globetrotting Magic Wand tries to go one better than last year in the $1 million Pegasus World Cup Turf event.

That race is due off in Gulfstream Park at 9.49pm Irish time, although O’Brien’s actual first runner of the year will be less than two hours before that with Simply Beautiful lining up for a Grade Three race.

Ryan Moore has travelled to Miami for both rides, although the focus is very much on Magic Wand who finished runner-up to the newly crowned 2019 US horse of the year Bricks And Mortar in last year’s race.

The prize fund has been dramatically slashed from $7 million a year ago, something repeated for the later main dirt event on the card which has seen the purse reduced from $9 million to $3 million.

The new Saudi Cup to be run at the end of next month has had an impact on that contest in particular, but Magic Wand continues to be a reliable fixture on the international circuit.

After last year’s Pegasus O’Brien’s teak-tough mare took in a trip to Dubai before being placed twice more at Grade One level in the US, and then running in Australia where she finally secured an elusive top-flight victory. Then came an unlucky second in Hong Kong last month

Now she’s back at Gulfstream for the 9½- furlong contest, where Magic Wand has an outside draw in the 12-runner field.

The unbeaten Del Mar Derby winner Mo Forza is among the leading home contenders, while Frankie Dettori travels to renew his partnership with Without Parole. The 2018 St James’s Palace Stakes winner was third to Uni on his first run for trainer Chad Brown in the Breeders Cup Mile in November.