Lord North dazzles in Prince Of Wales’s at Ascot 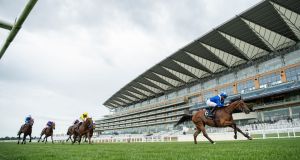 The importance of Royal Ascot’s top races to the bloodstock industry has been underlined as one of the urgent reasons for keeping the famous meeting on its original dates albeit behind closed doors.

Such breeding considerations were moot however after the day two highlight, the Prince Of Wales’s Stakes, which featured three geldings in the frame.

It was Godolphin’s jockey James Doyle who guided last year’s Cambridgeshire winner Lord North to a decisive defeat of Addeybb with Barney Roy in third.

Japan started 6-4 favourite but little went right for him having missed the kick at the start and he finished fourth.

The O’Brien runner’s pedigree and race record means he is already assured of a place at stud eventually. Such considerations have long since been irrelevant for his superiors on Wednesday.

Lord North received the unkindest cut of all just three races into his career. Addeybb got it before he ever even ran.

Barney Roy did make it to stud on the back of his 2017 St James’s Palace Stakes winning three-year-old career but fertility issues ended that happy path and he was returned to training.

Two top-class wins in Australia earlier this year testified to Addeybb’s general satisfaction and with nothing else on his mind, Lord North too is delivering on his racing talent.

The field of seven were almost in a line across the track early in the straight yet it didn’t take long for the four-year-old to assert his superiority.

“Lord North was gelded. He needed to be. He was tormenting himself. Testosterone is the most dangerous drug and he’s a lovely horse to be around now,” Gosden explained. “This boy just became aggressive at the gate and was becoming a danger to himself, let alone others.”

With Enable preparing for next month’s Eclipse, Gosden indicated Lord North will get a break after two quick races.

Russian Emperor has had three races already in 2020 and his next might be the biggest one of all after winning the Hampton Court Stakes for Aidan O’Brien.

The 100-30 shot came through late under Ryan Moore to beat the Queen’s First Receiver and Frankie Dettori by half a length.

As a son of Galileo and the Australian champion Atlantic Jewel, Russian Emperor’s pedigree is readymade for stud. His running ability is starting to match up to it too.

“He was very professional. He has had the benefit of a couple of runs this year and let’s see if the keeps progressing. His dam was exceptional in Australia. I think he’ll be a nice horse going forward for the rest of the year,” said Moore who was riding his 60th Royal Ascot winner in all.

Asked about the significance of that, the jockey was typically droll – “You wouldn’t really give it any thought, would you?”

Despite losing, First Receiver also got quotes for next month’s rescheduled Derby and his owner didn’t have to wait long for compensation on the day.

The Queen’s well backed 7-2 favourite Tactical made the most of a low draw to land the week’s first two-year-old contest, the appropriately titled Windsor Castle Stakes.

Lord North’s rider James Doyle secured a dream run up the rail and the Andrew Balding-trained winner had over a length in hand of Yazaman at the line.

It was normally an occasion to lift the stands off the roof. However the coronavirus pandemic meant even racing’s most famous owner has had to stay away, in her case missing the meeting for the first time in 73 years.

It was the Queen’s first Royal Ascot winner since Dartmouth landed the Hardwicke in 2016 and her 24th overall.

“To ride a winner here for Her Majesty is what dreams are made of,” Doyle said. “It worked out perfectly. He jumped really well from the stalls and was a true professional for a horse who had only run once before. He took it all in his stride.”

Dark Vision, a Group Two winner as a two-year-old and an expensive Godolphin purchase as a result, finally delivered another big race, albeit a handicap, in the Royal Hunt Cup.

“I feel great for Sheikh Mohammed who bought the horse as a two-year-old who had nothing but disappointment since until today. It is a drop in class to handicap company but the best of handicaps and he’s done it so well,” said his trainer Mark Johnston.