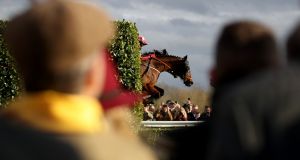 There was a crowd of 56,943 at Cheltenham on Wednesday. Photograph: Dan Sheridan/Inpho

A crowd of 56,943 at Cheltenham on Wednesday was down on last year’s record day two attendance of 59,209 with the Coronavirus threat again appearing to have an impact.

A slip in crowd figure is not a surprise to Cheltenham’s authorities and a spokesman admitted: “The last fortnight ticket sales have been very quiet.”

He added: “We have been liaising with the government throughout this. Their advice has been very helpful. We’ve been following their advice to the letter and will continue to do so until the conclusion of the festival.”

In other news Tiger Roll’s jockey Keith Donoghue was one of four Irish riders suspended for one day each for “misconduct” at the start of the Cross-Country Chase.

The starter reported that Donoghue, Mark Walsh On Josies Orders, Paddy Kennedy on Neverushacon and Yanworth’s jockey Darragh O’Keeffe failed to walk or jig-jog into the start.

The riders, who had all been briefed about the particular procedure for the start of this race, and the starter was interviewed and recordings of the incident shown.

Despite JP McManus’s 1,019/1 four-timer, defeats for Defi Du Seuil, Tiger Roll and Appreciate It in the bumper had bookmakers reporting a good day.

“We were looking at a horror movie after the first three results. But Defi Du Seuil and Tiger Roll got beat which was a massive turnaround,” said a Paddy Power spokesman.

“The bumper became an important contest but with Appreciate It getting done we’ve had a near miss and the books are up at the halfway stage,” he added.