Coronavirus: It can’t be politics as usual if we are to survive 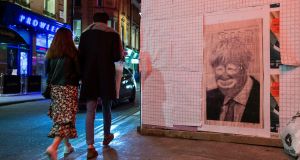 ‘Boris Johnson is relying on the appeal of his imperialist spin mode.’ Above, Soho in London. Photograph: Hollie Adams/PA Wire

Coronavirus has shown that there has never been a more important time to shift from the politics of me to the politics of us – but are our political leaders ready to listen and learn?

The rapid global spread of Covid-19 has inspired remarkable solidarity among a wide range of services and organisations, from supermarkets allocating hours for elderly shoppers to a raft of community-led initiatives organising volunteers to support vulnerable people who are isolated while living among us. It is a collective response perhaps unlike any we have seen in recent history.

Unfortunately, although Covid-19 is dominating the news cycle now, it represents only one global challenge, both for the public at large and our political leaders. Whatever the means individual governments use to gain control of Covid-19, they will still face the continued urgency of longer-term issues such as climate change, inequality and the survival of democracy as a political system, as well as the likelihood of another immediate global crisis.

To demonstrate how complex the political situation has become, the spread of Covid-19 has followed the spread of devastating fires in Australia. In the background, 2020 also represents one of the last chances governments have to control carbon emissions before the effects of climate change – notably extreme weather events and the conditions for the spread of disease and new viruses – become irreversible. In the US, even if cases of the virus have subsided by the summer, president Donald Trump may have to manage (or not) disastrous effects of the hurricane season, typically in late summer. The need for responsible and trustworthy political responses to ongoing crises is only beginning.

Here in Ireland, it is likely Fianna Fáil and Fine Gael will form a government in light of the pandemic. The justification is the need for stability. Calls for a national unity government – as an alternative to a government formed under pressure – will most likely be ignored.

Even if the two historically dominant parties do form a government, with understandable public support for a strong response to the crisis, what the public across national contexts wants politicians to learn from this crisis is a question policymakers and parties will eventually have to answer. It is the same question that emerged from the general election on February 8th.

Covid-19 has brought into sharper focus the urgent need to shift from the dual political messages of individual responsibility and populist “defence” of borders to a narrative that supports collective awareness, common interests, and international co-operation. Politicians entrenched in their positions, or just unable to unlearn their skills, could have trouble adapting, even if they know that that is what the political class should do to devise and implement effective policies.

More pointedly, out of this global pandemic, and other crises such as the fires in Australia, there will be a number of outstanding, potentially conflicting issues that will not be so easily answered or compartmentalised within political party interests.

These conflicting issues will probably override any political ambition that might benefit from actions such as closing borders and enacting stricter and sustained surveillance measures. As a very real example, take the negative and potentially devastating impact of reduced economic activity on individual employment and financial security against the corresponding positive effect of a slowdown on global carbon emissions; or the high cost but vital necessity of equal access to health services – so apparent in Ireland; and the quagmire of regulating social media, which skirts as of yet undefined lines between censorship and public responsibility.

I would suggest there are three lessons the “public” appear to want politicians to absorb. The first is to prioritise pragmatism and transparency, including legislating to protect critical voices, over ideology; the second, to invest in public services and lifelong learning opportunities and improve worker rights so that countries are prepared for the economic effect of the next crisis; and third, to understand the relevance of social solidarity for collective wellbeing.

Unsurprisingly, across the world we are witnessing immediate responses but not reflection on the structural causes of current or potential crises. In the case of Covid-19 and the fires, Australian prime minister Scott Morrison and Trump have responded by attempting to protect policy priorities, such as the coal industry in Australia and the border walls in the US rather than fundamentally change their position. The absurdity of their rigid political identities shows the danger of attempting to mould facts to political ideology when the facts cannot be politicised. Others have leaned towards interpreting “national interest” as “party interest”. But this strategy is anachronistic, for it means that politicians are not recognising that expectations of them are now altering in real time.

If we look at individual examples, they contrast in style but not necessarily in how they understand the political implications of the crisis. The liberal defender Angela Merkel is forthright, Xi Jinping is evading responsibility for a crisis created in part by his government, Boris Johnson is relying on the appeal of his imperialist spin mode and Vladimir Putin has seized the moment, when attention is elsewhere, to declare his intention to be Russian president for life.

Even if political leaders cannot change habits, those who can vote and those who cannot (too young or living under authoritarian regimes) understand that their individual survival depends on economic security, access to accurate information and the freedom to challenge the decisions of policymakers.

On a practical level, policies will need to account increasingly for the impact of both social and economic inequality and political participation on collective wellbeing. The immediate response to the pandemic has been to enforce control. The longer-term strategy must be to ensure that the structural conditions for generating resilience and confidence in each other and politicians is strengthened.